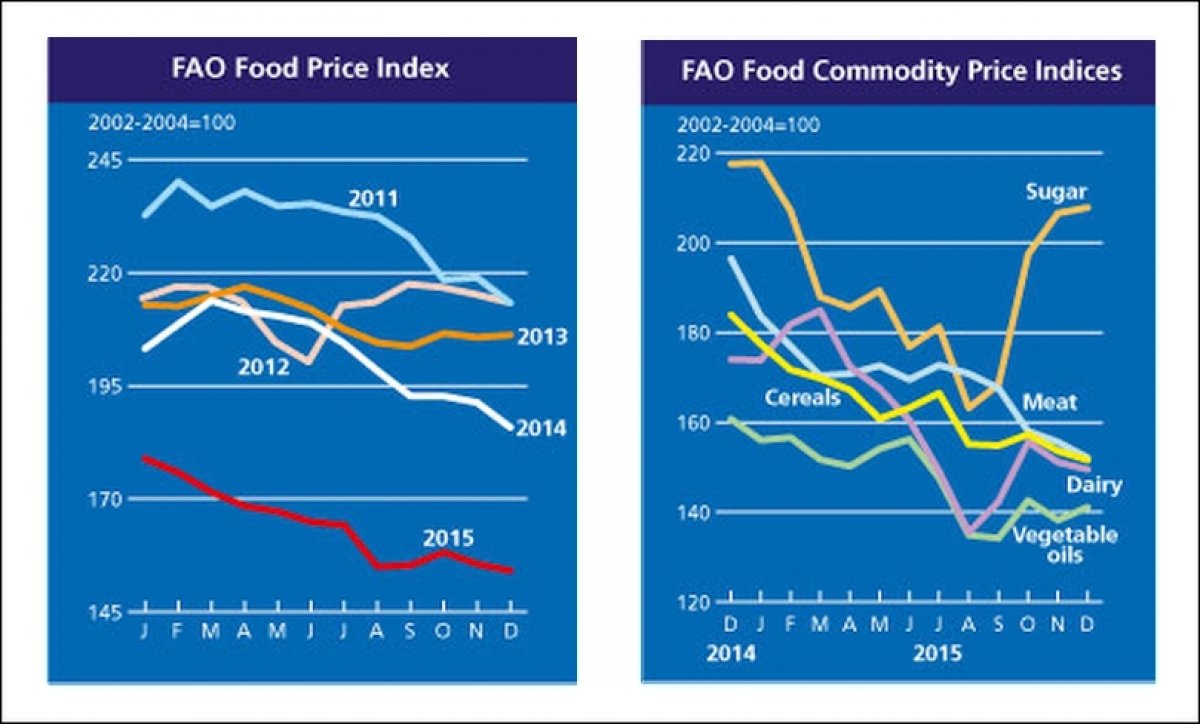 Global Food Prices fell almost 19% during 2015, according to the FAO Food Price Index (FFPI). The drop in food prices continued in December.

The FAO Food Price Index (FFPI) averaged 154.1 points in December 2015, down 1.5 points (1.0 percent) from its revised November value, with international prices of all the food commodities used in the calculation of the Index falling, except for sugar and oils. Over the full year, the index has averaged 164.1 points, nearly 19 percent less than in 2014, marking the fourth consecutive annual decline. Abundant supplies in the face of a timid world demand and an appreciating US dollar are the main reasons for the general weakness that has dominated food prices in 2015.

The FAO Cereal Price Index averaged 151.6 points in December, down almost 2 points (1.3 percent) from November. Expectation of larger supplies entering world markets following the removal of export taxes in Argentina weighed on wheat quotations. Maize prices also fell in December amid intensifying export competition and sluggish international demand. Rice quotations were more stable, as a revival of purchases sustained the prices of the lower quality Indica and of aromatic rice. Compared to 2014, the cereal price index shed 29 points, or 15.4 percent, in 2015.

The FAO Vegetable Oil Price Index averaged 141.1 points in December, up 2.9 points (2.1 percent) from November. The increase was driven by soybean oil, the prices of which leaped to 6-months highs, reflecting persisting uncertainties regarding Brazil’s soybean crop amid prospects of firming soyoil demand worldwide. By contrast, international palm oil prices remained stable, as concerns about possible production declines in Southeast Asia were counterbalanced by weak global import demand. For 2015 as a whole, the Index averaged 147 points, down 19 percent from 2014 and representing a 9-year low.

The FAO Dairy Price Index averaged 149.5 points in December, down 1.6 points (1.0 percent) from November. The decline stemmed from a fall in prices for milk powders, as those for butter rose and those for cheese were unchanged. Weak demand for WMP has led manufactures to focus on producing other dairy commodities. Butter was the product most in demand, particularly in the Middle East, North America and North Africa, which boosted its price by over 3 percent in December. In the EU, the possibility of sales of SMP to intervention stocks at a guaranteed price also increased the attractiveness of butter/SMP production over that of WMP. The Dairy Index averaged 160.3 points in 2015, down 63.8 points or 28.5 percent compared to 2014, marking its lowest annual average since 2009.

The FAO Meat Price Index averaged 152.1 points in December, down 3.5 points (2.2 percent) from its November revised value. Quotations fell for the four categories of meat, with ovine, bovine and pigmeat most affected. Reduced import demand in the United States for bovine meat intensified competition in other markets. For pigmeat, a surge in output in the European Union caused both domestic and export prices to fall. For 2015 as a whole, the Meat Index averaged 168.4 points, down 29.9 points or 15.1 percent compared to 2014 (a record year), and its lowest annual average since 2010.