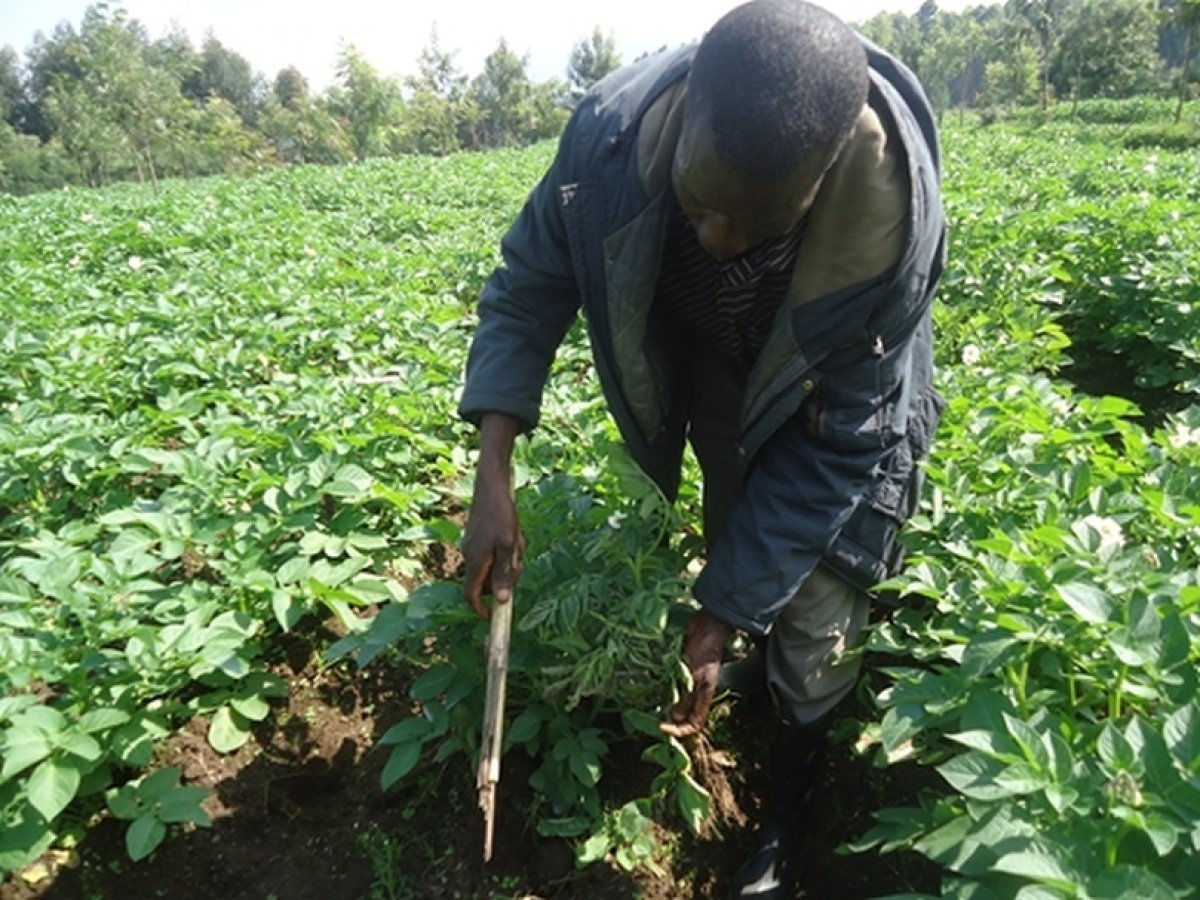 A Potato Farmer in Musanze, Rwanda, taking care of his crop (Courtesy: Umuhinzi)

Farmers of Irish potatoes in Rwanda are decrying not only the shortage of quality seeds but also the mounting prices. Donathile Mukanyandwi, a farmer in Kinigi sector, Musanze District told The Rwanda Focus that she failed to get seeds in her neighborhood after searching for a whole week. Donathile Mukanyandwi:

"The price has risen to Rwf500 from slightly over Rwf300 per kilo last season."

Another farmer, Joseph Gafaranga, is a member of Urugaga Imbaraga cooperative. He is worried that if the harvest prices do not also increase later, they could lose more since they have invested more in buying seeds.

"Seed prices have drastically increased. The price of potatoes harvest has risen from Rwf70 to over Rwf100 per kilo so farmers have sold the whole harvest without keeping seeds under "positive selection technique" for the months of March and April."

"Farmers will always be affected by poor quality seeds if seed multipliers are not increased. There's lack of financial capacity to produce enough seeds"

Rwanda Agriculture Board (RAB) is grappling many issues that are still hampering the sector. Telesphore Ndabamenye, the head of crop production and food security department, says that the issue of potatoes seeds is being considered along the whole value chain, from laboratory to seeds that can be grown by farmers.

"There are new private investors who are going to set up a Seed Company in the northern districts of Nyabihu and Musanze, and also in Nyamagabe and Nyaruguru districts."

Ndabamenye adds that the company will connect other multipliers to farmers, and then teach them how to prepare and treat different types of seeds depending on the period they last to germinate.

Ndabamenye further explains that RAB has been faced with lesser amount of seeds because of using green houses.

"But we are going to use a new technology to produce many minitubercules (small seeds) and distribute to seed multipliers for mass multiplication. This will make the price affordable."

The new investors will embrace the new technology to supply more to seed multipliers who will also produce and distribute enough seeds to farmers.

Under this system, each district will show how much multipliers have been produced per season, how much farmers will need and the time seeds must be availed. The company will also set up a storing infrastructure. Ndabamenye says that farmers store bad quality seeds under positive selection but it will be different under high technology.

"Seed multiplication in 2 or 3 years will reach 10 % of quality seeds needed by farmers in the country. We are at 3 % of better seeds."

. Irish potatoes are grown on 70,000 hectares across the country and 2 tons of seeds should be planted on one hectare to get better produce.

RAB says that a new laboratory being constructed in the Northern Province will increase production of seeds to 10 %. It will also amplify 80 seedlings multiplied in laboratory today to 800,000. Only 80 seed multipliers are available in the country and one seed multiplier can profit between Rwf3 and Rwf5m every season.
Source
The Rwanda Focus
Like to receive news like this by email? Subscribe!
Related Companies