“We’re pleased with our solid results in the first quarter, with each of our core business segments driving sales growth and expanding product contribution margins.”

“Our results continue to reflect the strong execution by our commercial, supply chain and support teams, as well as our ongoing commitment to invest in our production capacity, operating, sales and product innovation capabilities to support our customers’ growth, improve operating efficiency and execute on our strategies over the long term.”

“For the remainder of fiscal 2019, we continue to anticipate the operating environment in North America will remain generally favorable, with solid demand for frozen potato products and tight manufacturing capacity.”

“However, we expect that our European joint venture, Lamb Weston/Meijer, will face challenges arising from a poor potato crop.”

“Although it’s too early to determine the full impact of these challenges, we believe that Lamb Weston/Meijer’s pricing and cost reduction actions, along with opportunities in our North American and export businesses, enable us to remain on track to deliver on our fiscal 2019 targets.”

Net sales were $914.9 million, up 12 percent versus the year-ago period. Price/mix increased 8 percent due to pricing actions and favorable product and customer mix. Volume increased 4 percent, driven by growth in the Company’s Global and Retail segments.

Income from operations rose 11 percent to $152.6 million from the prior year period, which included $2.2 million of pre-tax costs related to the Company’s separation from Conagra Brands, Inc. (formerly ConAgra Foods, Inc., “Conagra”) on November 9, 2016.

This increase was partially offset by transportation, warehousing, input and manufacturing cost inflation, and higher depreciation expense primarily associated with the Company’s french fry production line in Richland, Washington, which started operating in the second quarter of fiscal 2018. In addition, gross profit included a $5.6 million loss related to unrealized mark-to-market adjustments and realized settlements associated with commodity hedging contracts in the current quarter, compared with a $3.2 million gain in the prior year period.

The rise in gross profit was partially offset by a $21.5 million increase in selling, general and administrative expenses (“SG&A”), excluding comparability items. The increase includes approximately $7 million of unfavorable foreign exchange, a $5 million increase in incentive compensation expense, primarily reflecting an increase in stock price and absolute shares outstanding, and a $3 million increase in advertising and promotional support. The remainder of the increase was largely driven by higher expenses related to information technology services and infrastructure, as well as investments in the Company’s sales, marketing and operating capabilities.

Adjusted EBITDA including unconsolidated joint ventures(1) was $212.9 million, up 11 percent versus the prior year quarter, primarily due to growth in income from operations.

For the full financial release, including additional details, the outlook for the remainder of 2019, as well as the explanations of the notes, we refer to the Lamb Weston Holdings website
Q1 2019 Segment Highlights

Net sales for the Global segment, which is comprised of the top 100 North American based restaurant chain customers as well as the Company’s international business, increased to $466.8 million, up 13 percent compared to the prior year period.

Price/mix increased 8 percent, reflecting the carryover impact of pricing actions taken in the prior year as well as improvement in customer and product mix. Volume increased 5 percent, driven by the benefit of limited time product offerings and growth in sales to strategic customers in the U.S. and key international markets.

Global segment product contribution margin(1) increased to $94.5 million, up 27 percent compared to the prior year period. Favorable price/mix and volume growth drove the increase, which was partially offset by transportation, warehousing, input and manufacturing cost inflation, as well as higher depreciation expense primarily associated with the Richland production line.

Price/mix increased 7 percent, reflecting carryover impact of pricing actions taken in the prior year as well as improvement in customer and product mix. Volume declined nominally as growth in sales of higher-margin Lamb Weston-branded and operator-labeled products largely offset the loss of some lower-margin, distributor-label product volumes.

Net sales for the Retail segment, which includes sales of branded and private label products to grocery, mass merchant and club customers in North America, increased to $116.2 million, up 26 percent compared to the prior year period.

Retail segment product contribution margin(1) increased to $22.7 million, up 38 percent compared to the prior year period, due to higher price/mix, volume and lower trade expense. The increase was partially offset by increased advertising and promotional support, as well as transportation, warehousing, input and manufacturing cost inflation.
Outlook
(Click to enlarge) 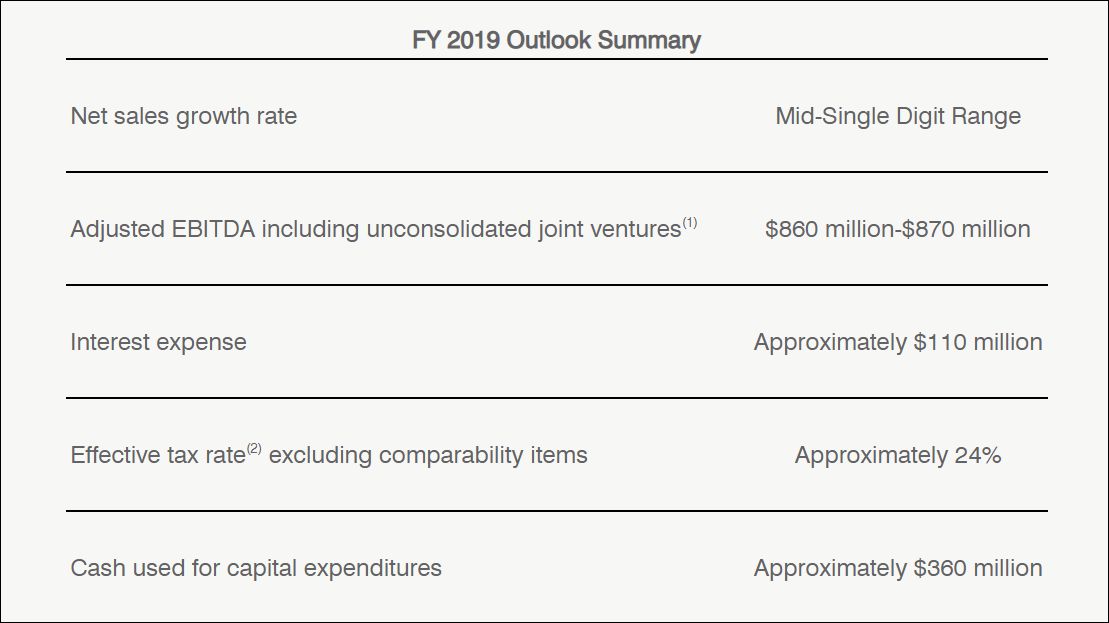 More on these statements

For fiscal 2019, the Company continues to expect:

In addition, the Company continues to expect:

Lamb Weston / Meijer is one of the larger manufacturer of French Fries and Potato specialties in Europe.

Lamb Weston is the master brand for the potato products produced by Lamb Weston and Lamb Weston / Meijer. A new Global Brand Identity was formulated in June 2015, introducing the tag-line "Seeing Possibilities in Potatoes"