Shortly after it became clear last month that falsified seed potatoes certificates of the Dutch Seed potato inspection Service, NAK (Nederlandse Algemene Keuringsdienst) were in circulation in the Netherlands and Belgium, Breeders Trust, in close cooperation with the NAK, succeeded in a short time to trace the perpetrators and was able to enact a confession from the guilty parties.

“The fraud committed with the NAK certificates will no doubt have serious consequences for the seed potato growers, traders and exporter involved.”

“We are also concerned about the potential negative consequences for Belgian consumers and growers in the marketplace if the authorities do not decide that this newly planted potatoes being removed as quickly as possible and be destroyed right away.”

The fraud case implicates the largest Dutch seed growing farmer, planting more than 350 hectares of seed potatoes annually. The fraud was reportedly committed over at least the past 3 growing seasons.

The farmer has now admitted that it has repeatedly withdrawn the Fontane variety from the seed potato pool. With this, the company knowingly committed a breach of contract and thereby seriously affected the seed potato trading and export company concerned.

For the past growing year alone, at least 250 tonnes of seed potatoes without official NAK certificates were apparently sold privately to the trading company Zeeland Trade B.V. established in Vogelwaarde. With the falsified certificates applied by this trading company, this material eventually found its way in particular to (ignorant) Belgian growers of consumption potatoes.

“This is a shameful thing. Not only has confidence in the NAK certificate been damaged internationally, but in recent years a large number of Dutch and Belgian ware potato growers have been misled and unintentionally involved in the illegal trade in propagation material.” 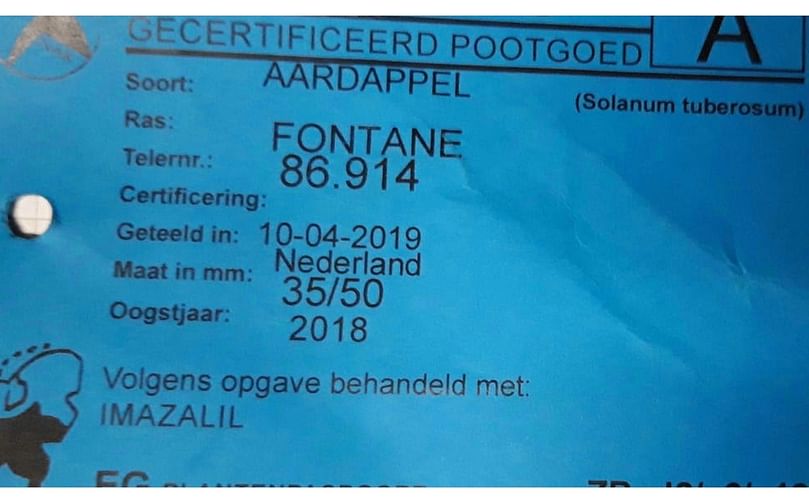 Breeders Trust calls on all Dutch and Belgian growers of ware potatoes, as well as brokers, to check in their administration records which varieties with which certificates they have received in bulk over the past 3 years via the trading company Zeeland Trade.

If it turns out that in recent years, in addition to the Fontane variety, more lots and varieties with a forged certificate (with numbers 549,495,787) have been traded, Breeders Trust will continue the investigation.

Growerss and brokers can report to Breeders Trust or the NAK. All reports will be handled strictly confidential.

In view of the seriousness and scope of the fraud case, the seed potato farmer and the trader involved are facing unprecedented fines and claims.

It is to be expected that the trader, in connection with the repeated falsification of the NAK certificate and thereby committing trademark infringement, will be tackled hard by the Dutch Inspection Service, NAK. This also applies to the seed potato farmer involved due to the trading of uncertified seed potatoes. Committing a contract deal with the seed potato trading company concerned by removing seed from the pool will certainly not remain without consequences.

It is still unclear what will happen to the recently planted seeds. That is the responsibility of the Dutch and Belgian authorities.

Affected farmers and brokers are free to initiate civil proceedings against their Zeeland supplier if they wish to do so.

Breeders Trust S.A. is an organisation of seed potato breeding companies in Europe involved in the development of new potato varieties. Breeders Trust supports the implementation and enforcement of their Plant Breeders Rights protection and the prevention of the illegal trade in plant propagation material.