After a very wet summer, slow and difficult harvesting conditions in Belgium, Holland and Germany.

After one of the most humid summers in the last decades, end of harvest conditions were slow and somewhat difficult in most countries. France was the exception with a very easy and rapid harvest.

In many cases, farmers delayed their harvest waiting for rain to better their harvest conditions, but at the end this sometimes ended up with slow harvesting conditions and yields.

End of September and into October and November (Belgium!), potato harvesters were running at 60 to 70 % of their capacity making the whole process slower.

Depending on countries and sub regions, gross yields were mostly average to good, but net yields will be lower due to a considerable amount of losses in fields (water damage) and physiological problems such hollow hearts, split potatoes and growth cracks.

And also due to storing problems which have started in some cases. But the industry, who very much needs all potatoes, is taking on most of the tubers without making much of a fuss.

Free markets remain supported by the reluctance of producers to sell what is now in storage, and by the dynamics of finished product sales (factories are having difficulty rebuilding stocks).

Industrial processing, however, faces supply difficulties and cost increases for some inputs (energy, oils, packaging, labour), while distant exports remain dependent on the possible resurgence of Covid-19 around the world.

These uncertainties aside, most observers nevertheless expect balanced markets throughout the season, with farm prices at least similar to contracts.

All along last season and calendar year, different production costs have gone up. Diesel and electricity have dramatically increased, spray costs were higher due to enormous late blight pressure. For next season fertilizer prices have increased more than 50 % for potash, and between 200 and 300 % for nitrogen.

During the same time, prices producers get for cereals and rape have also increased, making these crops more interesting and certainly much less risky than potato growing.

Potato growing involves ever higher risks, be it financially (higher production costs) or regarding climate change issues. This year’s (harvest 2021) contract prices went down by 0,50 EUR/100 kg to 2 EUR/100 kg compared to last year’s one, depending on type of potato(early or maincrop, variety) and country.

The NEPG reckons that contract prices for 2022/2023 should increase by at least between 3 to 4 EUR/100 kg to be interesting and worth considering by potato farmers. If not, area decreases could be the solution to better financial situations for growers 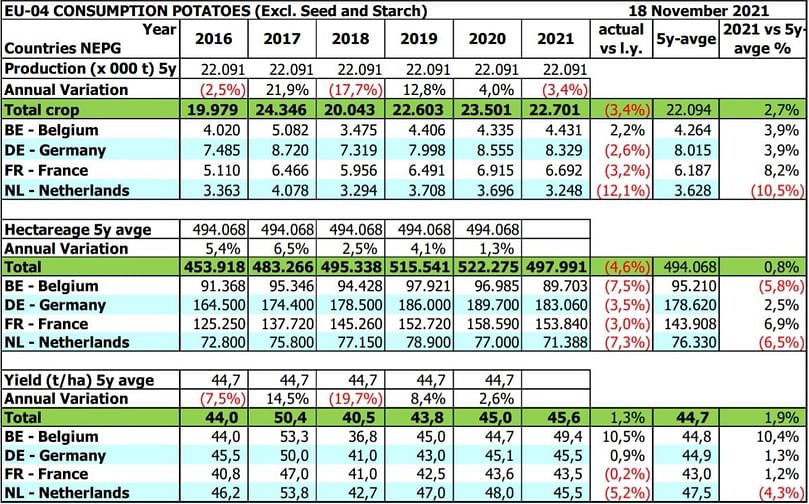 Area, yield and production in the NEPG zone.