Centers of Excellence for Rooted Apical Cuttings: Plugging the gap in quality seed production to boost rural livelihoods and food security in Asia and Africa

The potato value chain is an important contributor to national economies, as well as millions of smallholder farmer livelihoods in Asia and Africa. In Kenya, for example, 2 million people depend on the potato value chain for their food and nutrition security which contributes USD 500 million to the annual economy.

Yet potato production as a pathway to both catalyze inclusive economic opportunities within some of the poorest countries in the world and boost nutrition and food security is falling well below its potential with average potato yields across Sub-Saharan Africa (SSA) currently achieving between a half and a third of what is reasonably expected (6-15 t/ha compared to 20-30 t/ha). For example, in Uganda, potato farmers are only currently averaging 3-12 t/h.

One of the main obstacles to achieving higher yields is a lack of quality seed as seed production lags behind demand. Kenya, which leads in seed production across SSA, is only meeting 2% of seed demand – a low increase from 0.6% in 2009 – with the rest of the continent lagging even further behind. This yield gap is not limited to Africa. In India, the second-largest producer and consumer of potatoes in the world after China, the story is similar.

RAC is a way to boost clean affordable potato seed production by providing a cost-effective and speedy supply of clean starter material for the onward multiplication and bulking of EGS. RAC are rooted cuttings produced in sterile conditions from a juvenile tissue culture plant and then planted to produce tubers.

It is not a new technology – it has been practiced for decades in Vietnam for example, but its potential to transform potato production is only now starting to be realized thanks to work led by the International Potato Center in Kenya which is now starting to take root around the world.

Production of RAC is carried out in two stages, both of which take around 4-5 months. The first stage is to raise mother plants in a screenhouse in sterile conditions and maintained in a juvenile state. For 2-3 months, the mother plants – each of which can produce 100+ cuttings over time – produce shoots that are transplanted as cuttings into plugs and left for up to 3-4 weeks to root.

The second phase is to transplant the rooted cuttings into small plots to produce tubers that are then multiplied over two to three seasons to produce high-quality EGS.

The lack of affordable, accessible, and quality seed means that farmers often recycle seed from earlier harvests or buy from unregulated markets. This seed is often infected with seed-borne pathogens that build up and spread through the seed system over time.

To ensure a steady supply of seed potatoes produced from RAC to meet demand, innovative public- private partnerships that scale production through increased investment and capacity are critical. In many developing countries the cost of EGS production is covered by the public sector which is not able to recoup its costs so partnering with the private sector can be a mutually beneficial arrangement.

Establishing RAC production requires relatively low start-up costs and can become profitable after just two seasons of multiplication, which is attractive for investors.

In Kenya, after seeing the potential in RAC technology and the returns it could bring, a private sector company Stockman and Rosen invested in the infrastructure needed to scale production, such as screenhouses.

Work in Nigeria is supported by Fruits and Veggies Global Ltd, and in Uganda by Agromax Ltd, as well as the support of public sector entities.

RAC is also a suitable approach to accelerate the dissemination of novel varieties and can be useful in areas with insufficient land for traditional seed bulking.

Increasing farmer access to EGS for further multiplication is a major entry point to ensure seed availability for the next planting season and RAC technology is starting to plug the gap in supply. The results clearly show the potential of RAC to increase EGS production, producing 10-25+ tubers per cutting, and as such can be considered as a complementary approach to mini-tubers.

Centers of Excellence for Rooted Apical Cuttings: A Knowledge-Sharing Network

In addition to scaling the knowledge and lessons learned so far in Kenya, CIP is scaling out the technology and related know-how to other countries through the establishment of a network of Centers of Excellence (CoE) for Rooted Apical Cuttings.

The Centers are intended as a ‘one-stop shop’ for the production of early-generation potato seed through RAC in the screenhouse and the field within farming communities, to ensure a sustainable supply of high-quality seed potato of desired varieties through a decentralized network of seed producers. 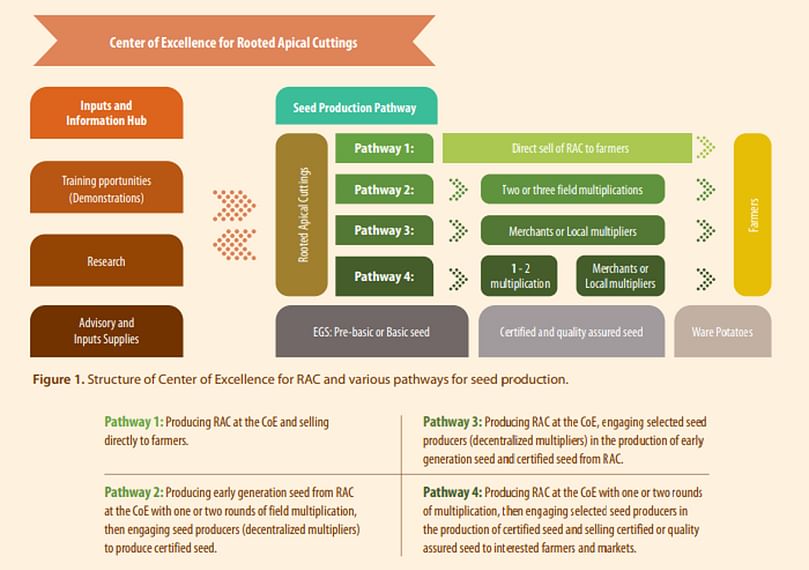 A business model geared towards a sustainable seed production chain will also involve different partners and stakeholders through the process. As part of the business model, the CoE can be a hub for information and inputs, and in addition, can offer research opportunities and can offer training services through the establishment of demo plots to promote the use of quality seed and RAC.

They will also present opportunities to share lessons learned between practitioners as the work scales out in different countries. Seed multiplier and farmer training, including on Good Agricultural Practices (GAP) such as weeding, hilling, soil nutrient, and disease management are also critical to reducing risks along the pathways, particularly from contamination.

The RAC program is scaling out in India, where it has the potential to reach millions of farmers and help potato farming reach its true potential for the millions who depend on it for food and potatoes.

Indian partners have also received technical and advisory support on RAC technology and secured the subgrant agreement from GIZ–India to CIP–India to scale out and operationalize the technology.

Work is in progress to establish a Centre of Excellence RAC facility in Bengaluru in collaboration with the University of Horticultural Sciences that will include a tissue culture facility of 20,000 in vitro plants of popular varieties, 500 sqm of temperature-controlled screenhouses to produce more than 100,000 cuttings per season, and the capacity to produce seed tubers from cuttings for further multiplication in the open field. Another facility is planned at the University’s Hassan research station.

The Center of Excellence in Mali, hosted by Institut Polytechnique Rural de Formation et de Recherche Appliquée (IPR/IFRA) at Katibougou, has already started training seed producers and researchers on EGS production through RAC, as well as planting in soilless media and the field.

Mali has received CIP potato germplasm, which will complement the efforts to develop seed systems with the introduction of RAC technology to boost the production of EGS in the country.

The Center of Excellence in Nigeria, hosted by Fruits and Veggies Global Ltd, has already started training seed producers and researchers in Nigeria on early-generation seed production through RAC, as well as planting in soilless media and the field.

Nigeria has received CIP potato germplasm, which will complement the efforts to develop seed systems with the introduction of RAC technology to boost the production of EGS in the country.

The Center will also showcase a profitable, high-quality seed production venture within the farming community by ensuring a sustainable supply of high-quality seed potato of desired varieties to the community and work with a decentralized network of seed producers to offer training services through the establishment of demo plots to promote the use of quality seed and RACs. It also aims to strengthen the seed system by bringing public and private sector actors together.

As well as boosting the quality seed supply, RAC is also bringing new employment and entrepreneurship opportunities to farmers, in particular women and young people in rural areas.

Farmers are better able to meet consumer and market demand for novel and improved varieties that have the traits and qualities people want, for example, large tubers that work well in processing plants.

Another benefit is that the seed potatoes produced through RAC are early generation, so farmers can save and recycle them over several seasons without a significant risk of losing quality.

There are also opportunities for farmers to become seed multipliers, particularly as the start-up costs, the land resources required, and risks are relatively low.

When compared to cuttings produced via aeroponics and sand hydroponics, the costs for RAC production are lower and only two rounds of multiplication are required compared to three so would need one extra season to get enough seed for 1 hectare.
Source
International Potato Center (CIP)
Like to receive news like this by email? Join and Subscribe!