At a recent field day in the southern High Plains near Springlake, Vales discussed the latest potato clones the breeding program has coming through the pipeline.

"We are quite excited about a light russet experimental potato clone that has a very special feature: a high percentage of starch and high gravity even under the very stressful high-temperature conditions in Texas."

"I think the french fry processing market, for which Texas has not released any processing russets, is a possibility."

The potato’s experimental identification is COTX08063-2Ru. The initial cross was made in Colorado and the selection made in Texas."

"Historically, Texas has not been a player in that french fry market, Vales said, primarily because of the heavy competition from the Northwest, which is really strong in that market.

"But also, in Texas, we cannot get the high solids required for the processing markets. Out of all of the varieties and experimental clones we evaluated over time, none of them had a high gravity."

"The experimental clone COTX08063-2Ru has a high specific gravity, even under high heat stress conditions in Texas, and makes very good french fries. This is the second year this clone is in the National French Fry Potato Trials."

She said the amount of starch in potato tubers is the main factor determining a potato’s use. High solids or gravity means the potatoes are solid and dense. The potato yield is high, as is the starchy matter.

High-starch potatoes are often used to make processed foods such as fries, chips and dehydrated potatoes. Potatoes with low to medium starch levels are frequently used for the fresh or table stock market. 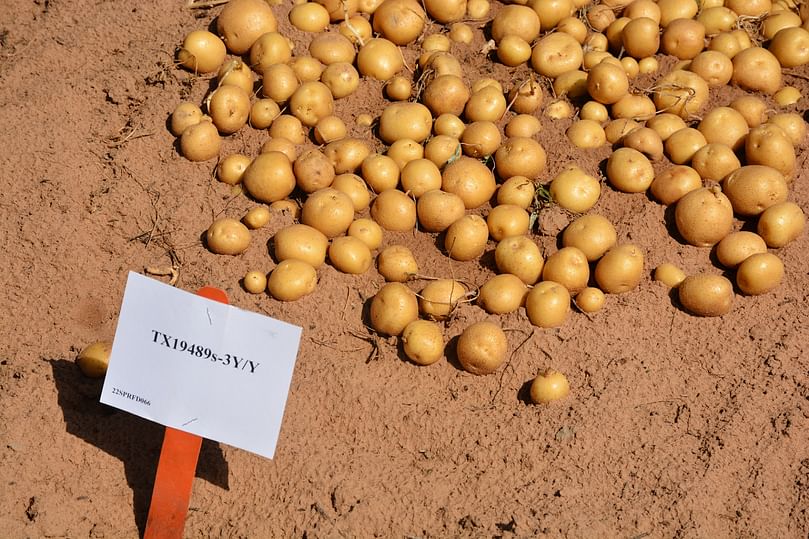 "The Southwestern program was established in 1997, and we are celebrating 25 years of successful collaborative work."

In the U.S., Vales explained, there are four regional potato variety development groups involving 12 breeding programs in public land-grant universities and others within the USDA Agricultural Research Service.

"In the southwestern region, we don’t have a USDA-ARS contribution like the others do."

Crosses and original selections are made in Colorado and Texas, followed by regional evaluation trials in all three states and additional states in the western region — Oregon, Idaho and Washington. Some french fry and chipping clones enter national trials every year.

She added that while federal funding is the program’s main source for public breeding, other funds come from state departments of agriculture, national commodity groups like Potatoes USA, foundations and in-kind support from growers. Additional funding comes from royalties derived from varieties released under plant variety protection, PVP, by the Texas A&M program.

"To obtain PVP, we have to declare that the potato varieties are unique, distinct and stable. Seed growers planting PVP varieties must pay royalties. Texas A&M has been very successful in that regard. The amount we received this past year is more than USD 900,000, and part of that is reinvested in the program."

Vales said the trials in various locations across the state and field days are the best way to let growers and the industry know about the latest potato clones in the breeding pipeline. 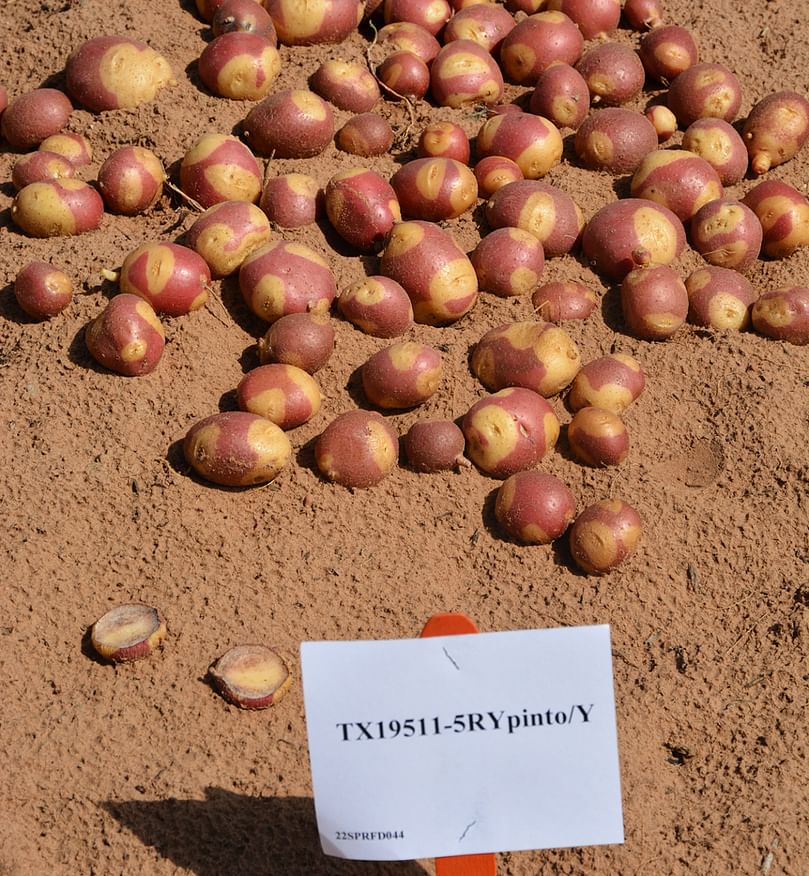 "This year, we had 180 different clones in the field day display, representing fresh and processing market classes. Within the processing class, we had chippers and french fry types; within the fresh, we had reds, yellows, purples, smalls and fingerlings."

Around 48 people from various U.S. states and Canada attended the Springlake event. The attendees expressed interest in some clones and shared priorities and challenges with the Texas A&M Potato Breeding Team and other participants.

Early and advanced selected clones included in the field day are also evaluated in agronomic trials in Dalhart and the San Luis Valley, Colorado, as well as California around Bakersfield, South Central Valley and Tulelake, near the Oregon border.

She indicated that cooler nights favor higher yields and fewer tuber defects. Thus, in Texas, the yields get higher with elevation and latitude. 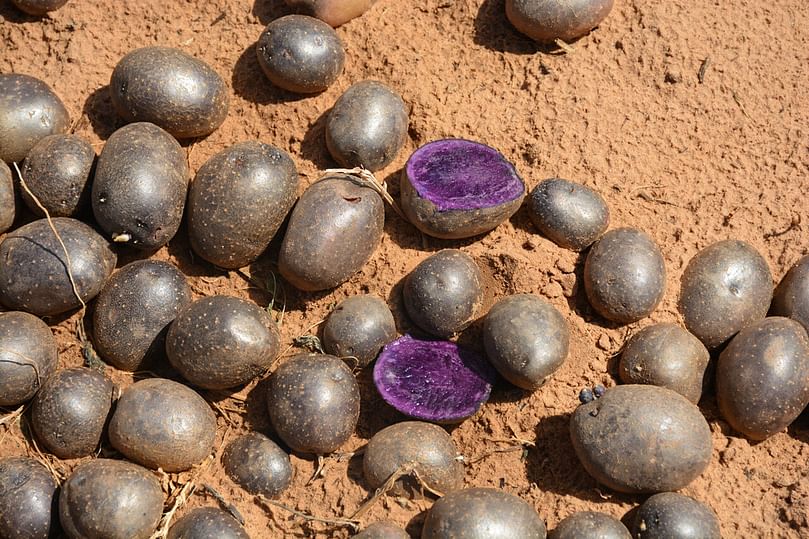 "We typically obtain much higher yields and better tuber quality out of the Dalhart trials located in the Texas Panhandle."

"The potato varieties we develop come in different tuber sizes, shapes, skin and flesh textures and colors that fit different market needs. For instance, we collaborate with Tasteful Selections, looking for clones with many small tubers."

"We are also growing fingerlings and bi-color potatoes. Recently, we developed a round russet with pink eyes and yellow flesh that was provided an exclusive release to explore new market opportunities." 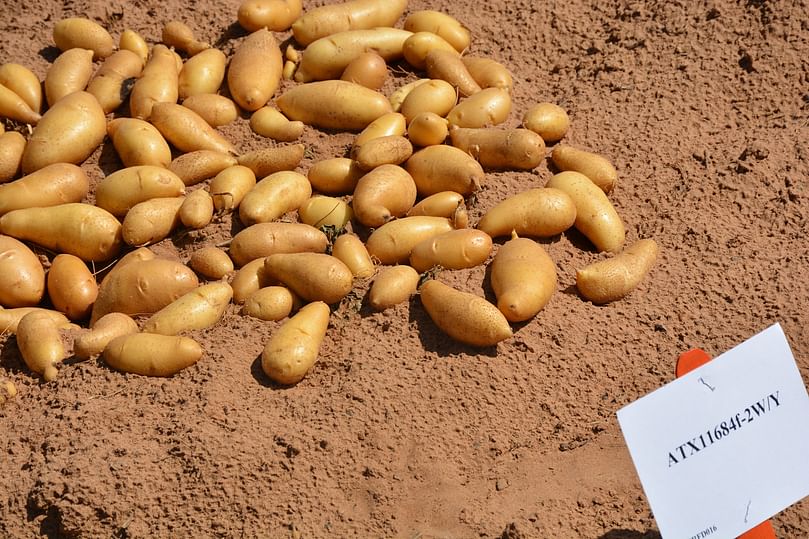 The Texas A&M Norkotah Russet strains continue to be the most popular, with 35 licensees in 12 states, she said. These are fresh-market russets.

Potato entries are evaluated in each state’s trials for numerous traits, including chip and french fry quality, Vales said. Top entries move to Southwestern for two years and Western Regional Trials for up to three years. Superior clones are released as new varieties.

Also, Colorado, Texas and California participate in National Chip Processing Trials and the National Fry Processors Trials. Advanced selections are also sent to collaborators all over the U.S. and Canada.

"These potato cultivars represent a substantial and increasing part of the national potato acreage and have significantly contributed to regional and national economies."

Several potato cultivars released by the Southwestern Region were listed in 2021 among the top 50 grown based on seed acreage in the U.S. Those developed in the region ranked second among the four regional projects, behind the Northwest and substantially ahead of the North Central and Northeast projects.
Fuente
Agrilife today
¿Te gustaría recibir noticias como esta por correo electrónico? ¡Únete y Suscríbete!
Empresas Relacionadas

The Agricultural Research Service (ARS) is the U.S. Department of Agriculture's chief scientific research agency. The ARS mission is to find solutions to agricultural problems that affect Americans every day, from field to table.

Colorado State University (CSU) is recognized as one of the premier research institutions and routinely ranks in the top of all American Universities in research expenditures.
Variedades de papa mencionadas