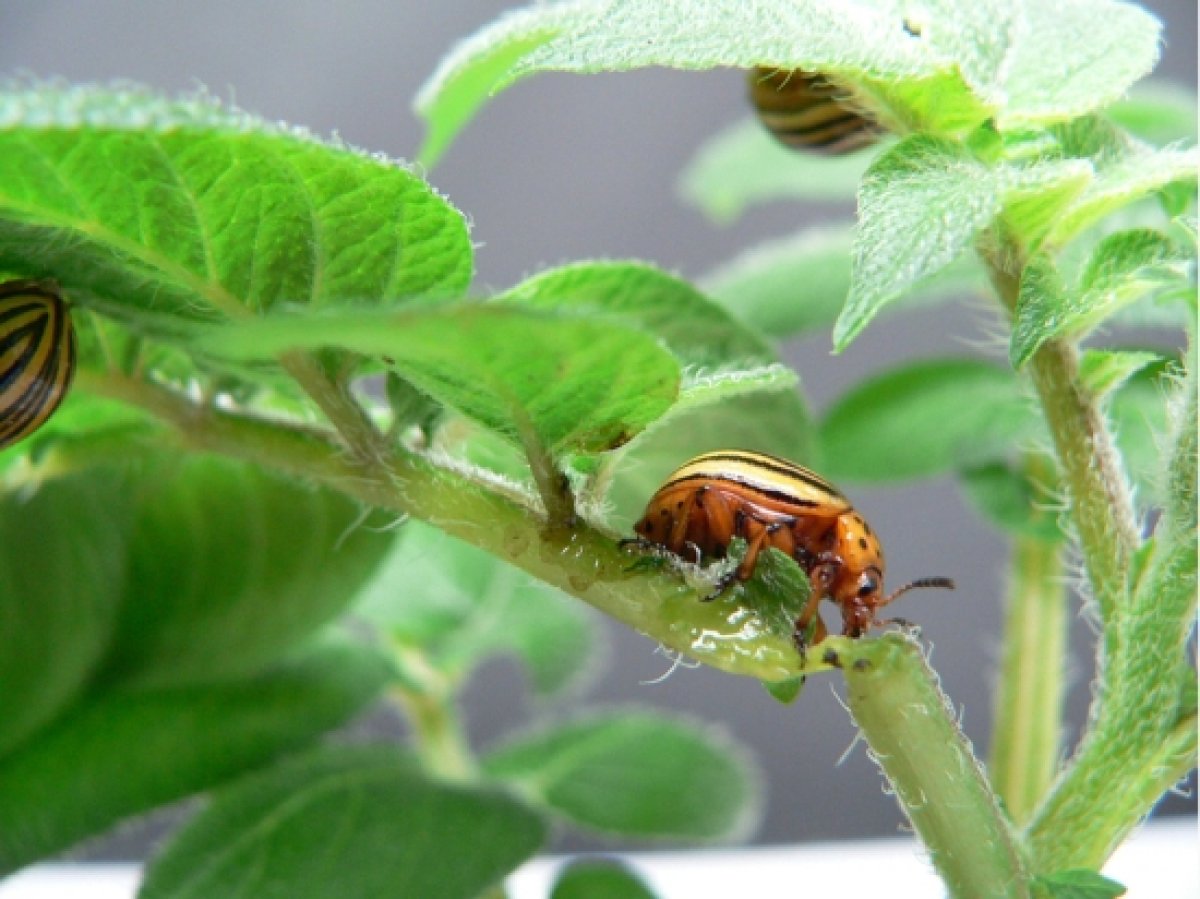 Colorado potato beetles are a dreaded pest of potatoes all over the world. Since they do not have natural enemies in most potato producing regions, farmers try to control them with pesticides.

However, this strategy is often ineffective because the pest has developed resistances against nearly all insecticides.

Now, scientists from the Max Planck Institutes of Molecular Plant Physiology in Potsdam-Golm and Chemical Ecology in Jena have shown that potato plants can be protected from herbivory using RNA interference (RNAi). They genetically modified plants to enable their chloroplasts to accumulate double-stranded RNAs (dsRNAs) targeted against essential beetle genes.

RNA interference (RNAi) is a type of gene regulation that naturally occurs in eukaryotes. In plants, fungi and insects it also is used for protection against certain viruses. During infection, many viral pathogens transfer their genetic information into the host cells as double-stranded RNA (dsRNA). Replication of viral RNA leads to high amounts of dsRNA which is recognized by the host‘s RNAi system and chopped up into smaller RNA fragments, called siRNAs (small interfering RNAs). The cell then uses siRNAs to detect and destroy the foreign RNA.

But the RNAi mechanism can also be exploited to knock down any desired gene, by tailoring dsRNA to target the gene's messenger RNA (mRNA). When the targeted mRNA is destroyed, synthesis of the encoded protein will be diminished or blocked completely. Targeting an essential gene of a crop pest can turn dsRNA into a precise and potent insecticide.

Some crop plants have recently been engineered by modifying their nuclear genomes to produce dsRNA against certain insects. „This never resulted in full protection from herbivory“, says Ralph Bock of the Max Planck Institute of Molecular Plant Physiology, „because the plant's own RNAi system prevents the accumulation of sufficient amounts of dsRNA. We wanted to circumvent this problem by producing dsRNA in the chloroplasts instead“. These organelles, which perform photosynthesis in green plants, are descendants of formerly free-living cyanobacteria, which are prokaryotes that lack an RNAi system. Presuming that chloroplasts would accumulate high amounts of dsRNA, the scientists in Ralph Bock's group decided to generate so-called transplastomic plants. In such plants, the chloroplast genome is the target of genetic modification instead of the nuclear genome.

To test this system on a real insect pest, the scientists chose the Colorado potato beetle. This little striped beetle was introduced into Europe accidentally at the end of the 19th century. Nowadays, it is a worldwide pest and can cause massive damage in agriculture. Besides potato leaves the adult beetle and its larvae also feed on other nightshade crops, like tomato, bell pepper and tobacco. The pest is difficult to control because of the widespread occurrence of insecticide resistance. „By using chloroplast transformation we generated potato plants that accumulate high amounts of long stable dsRNAs targeting essential genes in the beetle“, says Ralph Bock. Feeding experiment with different potato leaves: Detached leaves of unmodified plants were compared to plants with an altered chloroplast genome. First instar larvae were fed on these leaves for three days in intervals of 24 hours. The leaves were replaced after each interval.

The efficacy of the dsRNAs as an insecticide was tested at the Max Planck Institute for Chemical Ecology in Jena. Larvae were fed on detached potato leaves and the mortality was monitored for nine days. The leaves were taken from transplastomic dsRNA plants, conventional transgenic dsRNA plants with a modified nuclear genome, and unmodified plants. For comparison, dsRNAs targeting two different genes were tested.

„Transplastomic leaves producing dsRNA against the actin gene caused a mortality rate of 100% after five days of feeding“, says Sher Afzal Khan from Jena. The actin gene encodes a structural protein that is essential for cell integrity. In contrast, plants with a modified nuclear genome expressed much less dsRNA and only slightly slowed down the beetles' growth.