It's still a month to go for Valentine's Day but Pepsico India is already ready to celebrate love, albeit, in a quirky way through its new Lay's campaign - 'Love to Love it'.

The new campaign celebrates the love for the great taste of Lay's in a way that is edgy, humorous and will appeal to the Indian youth.

The campaign idea for 'Love to Love it' is based on a simple but powerful snacking insight, that a delicious snack like Lay's is tempting enough to trigger change in people's demeanour, even if it be for a moment. It can make people act in uncharacteristic ways in order to get to their hands on a pack of Lay's. The campaign unfolds through a series of exciting films featuring brand ambassador Ranbir Kapoor, essaying offbeat and never-seen-before characters. The campaign will see Ranbir Kapoor in humorous, playful situations that will give consumers a reason to go out of character for the love of Lay's. 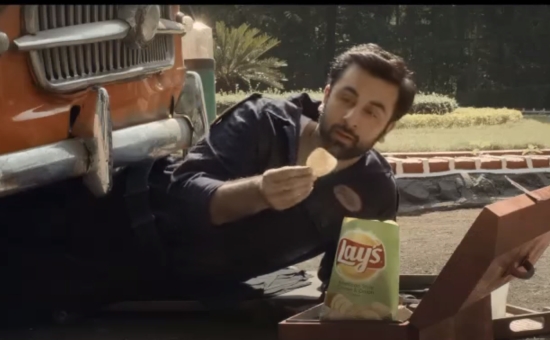 Lay's TV Commercial (in India): What happens when Ranbir refuses to share his pack of Lay's? Check out how Nani turns Ninja for the love of Lay's! What would you do?

"Our new campaign has been built on the insight of the basic human truth of how on seeing something tempting, one can do whatever necessary to get it; even if it means acting out of character. The campaign has been woven around the great taste of Lay's, which triggers an intense urge in people to get the pack. The campaign highlights the fact that you just can't help loving the great taste of Lay's and hence, the tagline 'Love to Love It'."

Speaking on his experience of working on the campaign, Ranbir Kapoor, Brand Ambassador, Lay's:

"Lay's is a brand which speaks to the youth of the country. The idea behind the new campaign is that when you see a packet of Lay's you just want it and will do anything to get it. The campaign is all about the love for Lay's, which is extraordinary, fresh and wicked. It's edgier than any of the previous Lay's campaigns, and has a wackier take on idea of love. I had a lot of fun playing the different characters in the films and I'm sure consumers will have as much watching it, as I did shooting it."

"'Love to Love it' is based on a simple truth that you can't help loving the great taste of Lay's. The creative idea is about how you can go to any length to get your Lay's. The films are a humorous take on the proposition, with Ranbir Kapoor in unexpected roles. There is an integrated campaign being developed on this idea."

Ever since its launch in 1995, Lay's has always stood for great tasting potato chips in international flavours that consumers have come to love over the years.

With the new brand campaign, Lay's seeks to celebrate this love for Lay's and engage with consumers across multiple touch points. The campaign will unfold with a power-packed 360-degree outreach and engagement plan across media vehicles.

The brand will have a significant presence across digital, retail, radio, print and TV.
Source
Pepsico India
Related Companies
Pepsico India
PepsiCo entered India in 1989 and in a short period, has grown into one of the largest food and beverage businesses in the country.
Read More
Lays
Read More
Related Topics
Chips and Snacks
Ads for potato products
Highlighted Company