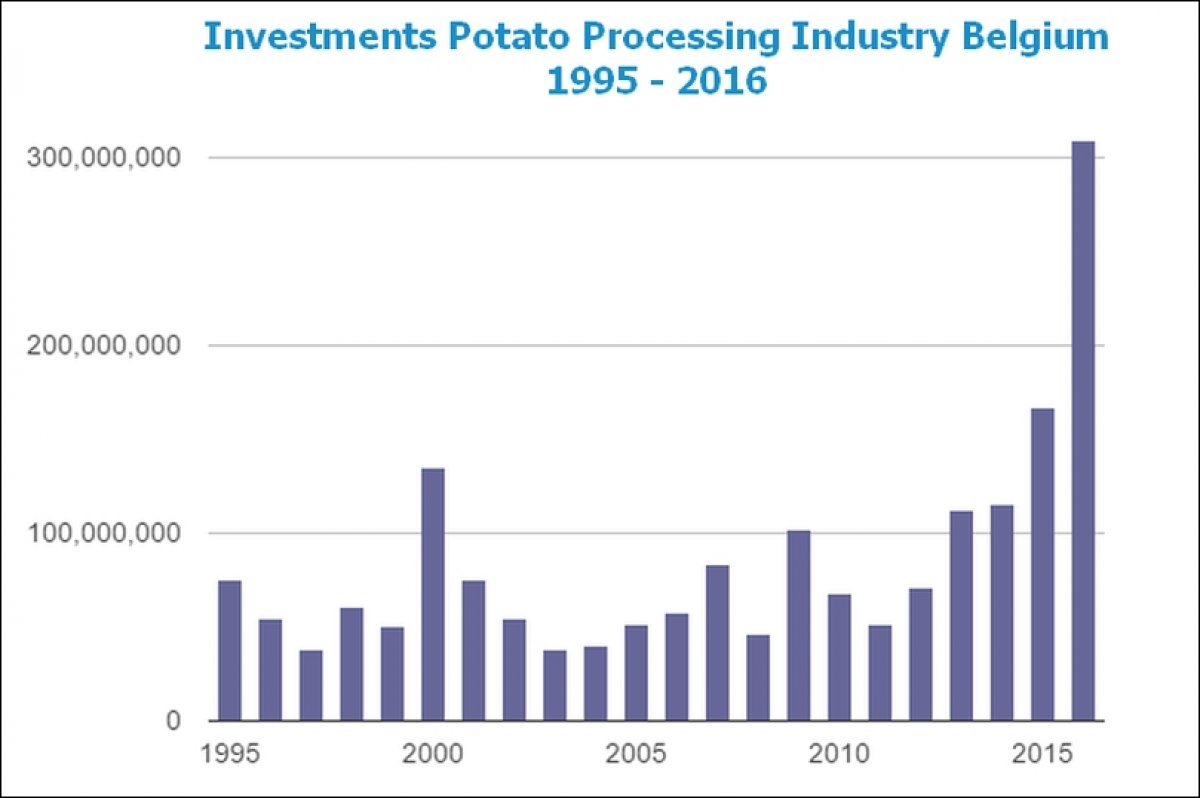 According to the data of Belgapom, the Potato Processing Industry in Belgium last year not only set a record for the amount of potatoes processed, but also a record for investments in the sector, with over 300 million euro (325 million USD) invested.

According to the data of Belgapom, the Potato Processing Industry in Belgium last year (2016) not only set a record for the amount of potatoes processed, but also a record for investments in the sector, with over 300 million euro (325 million USD) invested.

The fact that this growth sector within the Belgian food industry with 4.4 million tonnes (+ 11% compared to 3.97 million tonnes in 2015) once again processed a record volume of potatoes is not new, but the increase from one calendar year to the next has never been so great. 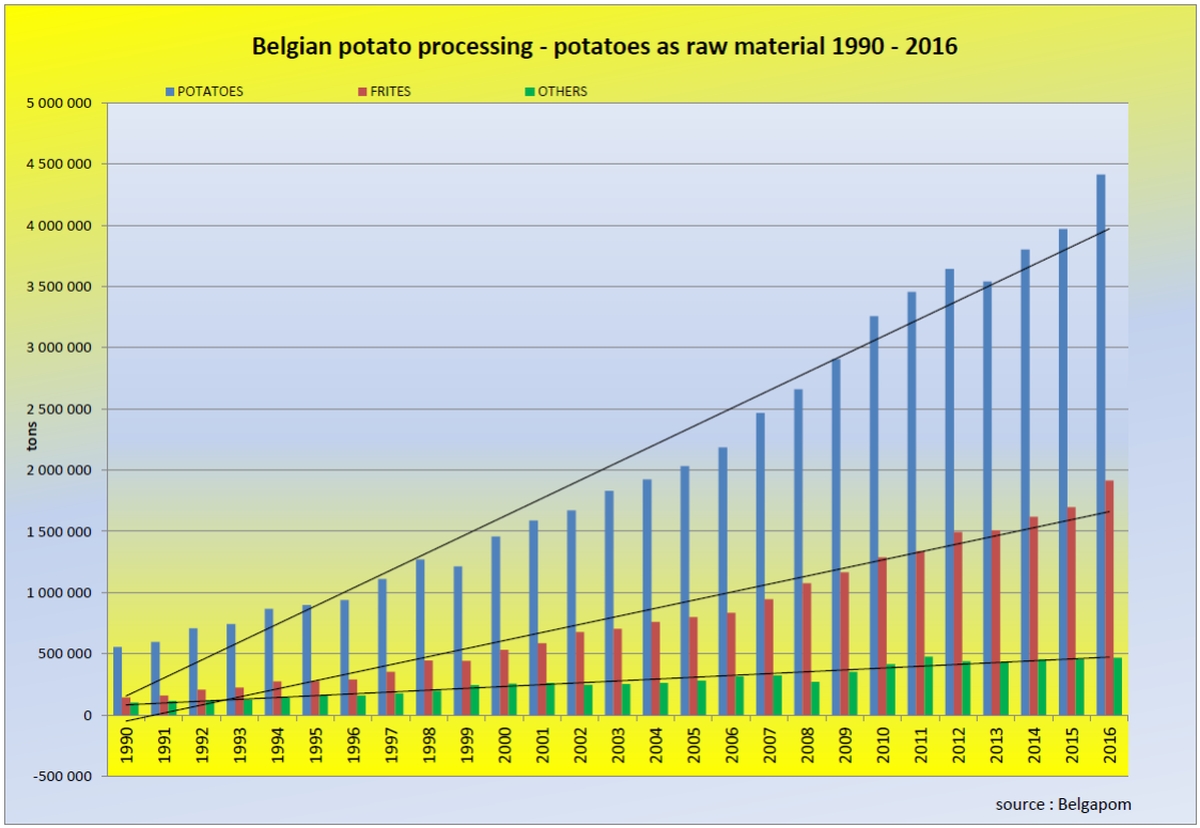 The increasing amounts of potatoes processed by the Potato Processing Industry in Belgium (Courtesy: Belgapom)

The rise in frozen fries is no surprise, after all the Belgian potato processing industry exports 80% of its total production, of which an increasingly large share goes to third countries all over the world.

The fact that the potato sector has faith in the future is illustrated by the highest investment figure since the start of the annual observations in 1995: in 2016 no less than € 310 million (+ 85% compared to the previous record year 2015) were invested in quantitative and high-quality innovations within the sector, of which the greater part are family companies.

In 2014, the Belgian potato sector started a ‘sustainable growth’ project, whereby in consultation with the entire chain and in collaboration with a number of Belgian research institutes, several innovations were started with an eye to the sustainable production of potatoes and potato products. Recently, a tool was launched in the form of ‘watchITgrow’ to assist producers and buyers to increase potato production sustainably through cooperation. 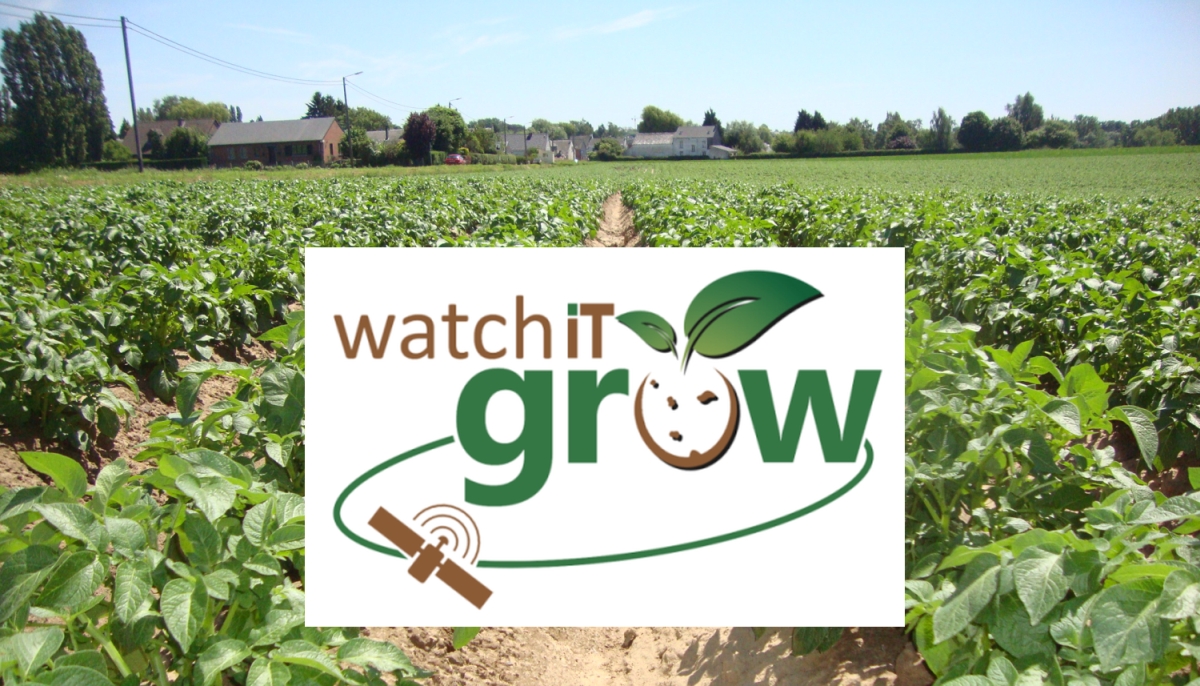 Recently, a tool was launched in the form of ‘watchITgrow’ to assist producers and buyers to increase potato production sustainably through cooperation.

Together with the FPS Public Health and the FASFC, various projects to prevent organisms harmful for potato growing and where necessary control them, were committed to.

In the meantime, intensive work continues on other projects such as Bintje Plus and Reskia, that aim to reduce the use of crop protection products.

The recent update of the BAT study (best available techniques in the area of environmental measures for the AGF sector in Flanders) and the current revision of the BREF study (European BAT) show that our Belgian companies are global leaders in this respect too.

However, there are threats for this growth sector too.

‘Small country, great food’ is the slogan of the Food.be campaign, that aims to simulate the export of Belgian food products.

Protectionist reflexes all over the world threaten to throw a spanner in the works, however. Thus, the Belgian (and European) potato chain was confronted with unwarranted anti-dumping measures taken by the South African and Brazilian governments. The European Commission – competent in this matter – had shown that the procedure was full of loopholes. However, apparently, the Commission does not have sufficient mandate and resources to intervene adequately in these WTO proceedings.

It therefore seems a priority for the Belgian (and European) potato chain to be taken seriously as a sector by the authorised departments of the European Commission in order to see its interests more strongly represented.

After all, it is a fact that potato production is increasingly evolving from a ‘secondary crop’ to a ‘main crop’ for a large part of the European farmers.

Recent figures relating to the suppliers for the agricultural and horticultural sectors show that companies active in the potato chain have evolved into the clear leaders in this sector. That is why Belgapom continues to commit to further sustainable growth in the interest of the entire potato chain, whereby we also need to look squarely at the global opportunities to promote potato growing in new growth countries.

A few years ago, Belgapom launched the character James Bint (with a license to fry) as the ambassador of “Belgian fries”. He will propagate the Belgian culture of fries, of which the ‘chip shop culture’ – that was recognised as cultural heritage by the Dutch and French-speaking communities – all over the world. 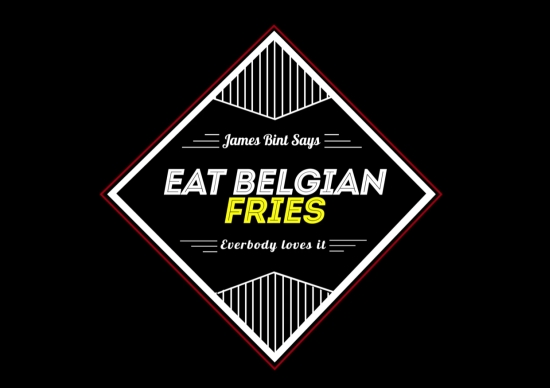 Thus, VLAM will soon start a promotion campaign in Vietnam, Malaysia, Indonesia, Thailand and the Philippines to put ‘Belgian fries’ on the map there too. These countries are above all familiar with the North American ‘French Fries’ from fast food chains.

The aim of this campaign is to let the ever-growing middle class experience “original Belgian fries from the heart of Europe”.