Zambia and South Africa may be perfectly at peace, but farmers on either side of the Limpopo River - the border between the two countries - may be engaged in a trade war.

Around a table in the boardroom at the Zambia National Farmers Union (ZNFU) offices in Lusaka, there is some tough talking from some local commercial and small-scale farmers.

Top on their discussion menu is potatoes, and a bit of onions and tomatoes. This is a fruits and vegetable working group, formulated to lobby Government to protect the interests of local farmers from cheaper vegetable imports.

What is currently worrying the farmers is cheaper imports of potatoes from South Africa that have flooded the local market.

According to the farmers, South African potato markets are currently over supplied due to a bumper harvest in the Eastern Freestate on the back of good rains. Antony Barker, director for Buya Bamba Limited:

“I have investigated the issues as these potatoes are spilling over into our markets and the market information is that this will continue until the end of August.”

“The Zambian growers cannot compete at these levels and are already selling at below cost of production.”

“The South African farmers are also selling below their costs at the moment.”

But over-production and over-supply is South Africa’s problem not Zambia’s problem, argue the farmers.

The farmers want Government to regulate the importation of potatoes the same way it has done for crops such as wheat.

“Fruits and vegetables, with a specific reference to potatoes, onions and tomatoes, are part of the staple diet of the Zambian people and there should be no reason why parallels cannot be drawn between the potato industry with the likes of wheat with regards to regulating imports.”

Buy-local campaigners such as BuyZed Campaign have also joined in the lobbying for regulation of potato imports. Evans Ngoma is the management consultant for BuyZed. He says if Government wants an agriculture-based economy, it should ensure that crop marketing favours the farmers. Mr Ngoma says Government should not allow what has happened in the soya bean sector to happen in the potato industry.

Prices in the soya bean sector have crashed due to over-supply on the local market. The farmers also want Government to compel local food chains to stock local produce where it is available.

A representative from Shoprite, which is one of the biggest traders in potatoes, says the store is now buying its potatoes from local suppliers such as Buya Bamba. Buya Bamba Limited, which operates on an out-grower scheme basis, has grown to become one of the major players in the potato sector. Actually, Mr Barker started as a small potato trader at Soweto market a few years ago.

Mr Barker says the potato sector can grow into a major employer:

“Government has issued many press releases that the economy needs to diversify from being reliant on copper and expand into agriculture in order to help with job creation and to empower the farmers to avoid the mass urbanisation that is taking place.”

“We estimate that one hectare of potato production employs directly or indirectly four people. Therefore, the potato industry alone is employing an estimated 5,000 people.”

One of the biggest potato growers in the country is Graham Rae, who owns Zambezi Ranching and Cropping Limited (ZRC). The company employs 800 people to work on its tobacco and potato fields.

With his crop almost ready for harvest, Mr Rae is concerned that the already flooded market may affect his US$6 million investment.

“ZRC is about to start harvesting our 2017 crop and I am extremely concerned at the quantity of imported table potatoes on the Zambian market.”

But Mr Rae has even a bigger worry about the imports – biosecurity:

“I investigated the criteria that are involved in importing table potatoes into Zambia and compared them with those of South Africa.”

“In 2015, Zambezi Ranching and Cropping Limited attempted to export processing potatoes into South Africa but were blocked on the basis of the South African phytosanitary regulations.”

“How can the Zambian farmer be competing with the South African farmer in his own ‘back yard’?”

“It must also be noted that Zambian farmers are not allowed to export either to Zimbabwe or to South Africa yet our borders are open to all.”

And Mr Rae’s fears about biosecurity are not unfounded. Two years ago, South Africa reported an outbreak of bacterial wilt in the Sandveld region.

Bacterial wilt is considered one of the most destructive bacterial plant diseases in the world. In 2005, the bacteria caused damage in the potato industry amounting to US$950 million globally.

What makes the bacteria even more notorious is the fact that it has many hosts, including soil.

“I request an immediate suspension of the issuing of an import permits for table potatoes until more stringent Zambian import requirements are put in place.”

The other major concern for the farmers is that while it is easier for neighbouring countries to export into Zambia, local producers find it hard to export into markets across its borders.

And it is not only the southern border that the farmers are concerned about, Tanzania also is a major source of potatoes. And the border with Tanzania at Nakonde is one of the most porous in the country. Actually most of the potatoes that are said to come from Nakonde come from across the border. And with Tanzanian potatoes, they are imported as unwashed potatoes, raising further concern about possible transfer of disease.

Zambian regulations do not allow importation of crops that have soil samples.

Mr Barker wants a phytosanitary laboratory to be set up at strategic places such as Kapiri Mposhi to check agriculture produce entering the country through the Nakonde border.

But critically missing from the discussion table is data. No one can tell the quantity of potatoes the country consumes for any given period of time, neither is it known exactly how much potato tonnage the country produces.

According to Mr Barker, the hectares planted for harvest and subsequent supply into the market from June to March 2018 is estimated at 1,200. This hectareage translates into 65,000 metric tonnes of potatoes. Antony Barker:

“I can only know my levels when the borders are closed.”

And that uncertainty in the local supply chain is why Government is pussy-footing on regulation, according to one official from the Ministry of Agriculture. He explains that Government fears creating a gap in the market once it imposes import restrictions, a gap that might cause prices to escalate.

But a representative from the fruit and vegetable association Duncan Chirwa says the traders sell about 1,800 tonnes of potatoes in a year, mostly imported from South Africa.

“At the moment we are getting most of our supplies from SA, which as a Zambian I feel is not good.”

“Our view is that our own agro industry must grow. We import just to meet the short fall.”

And one thing that the farmers in the group are all agreed upon is that there must not be an absolute ban on the importation of potatoes, but regulation.

Meanwhile, at Soweto market, the traders do not seem to mind which flag is printed on the bags of potatoes on their stands – whether Zambian or South African.

Buya Bamba is a leading potato grower in Zambia. The company is the leading distributor of table and processing potatoes in Zambia. 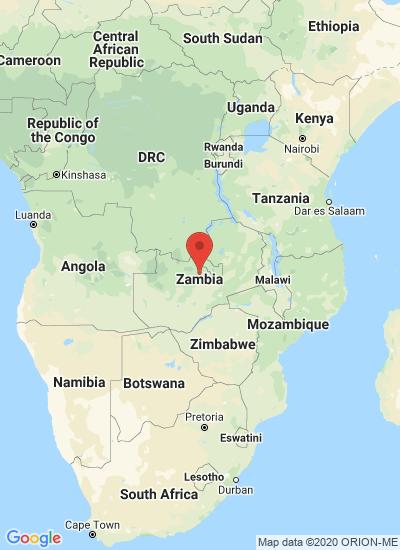