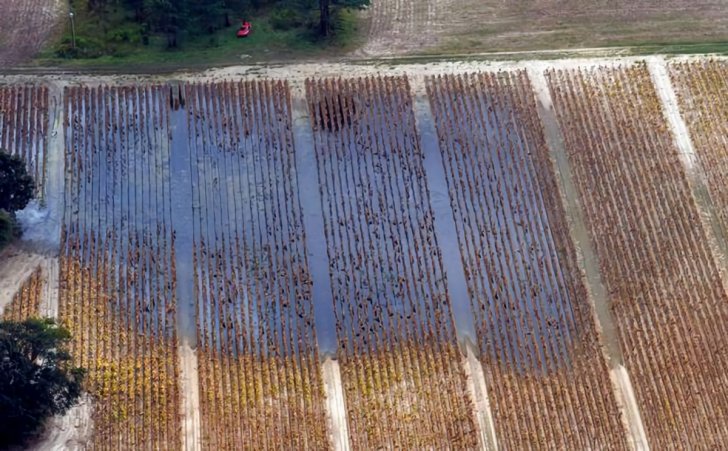 An aerial view of a tobacco field in North Carolina after hurricane Florence. Any sweet potatoes that have been submerged for days will not be harvested.

Dewey Scott was flying a drone to survey some of his family’s farm fields after Hurricane Florence this week when he saw that a small pond had spilled over into one of their sweet potato fields.

Information like that will be useful when he’s able to harvest. Sweet potatoes don’t like being submerged, and Scott’s crews will skip places where water has stood for days.

The problem for North Carolina’s sweet potato farmers is knowing whether the drenching rains unleashed by the hurricane will have the same effect as being inundated by a flooded pond or creek. Ten to 15 inches fell on the more than 3,000 acres of sweet potatoes that Scott Farms grows within 50 miles of its headquarters near Lucama in Wilson County. Farther south, sweet potato fields received as much as 30 inches.

Because sweet potatoes grow underground, farmers won’t know the storm’s impact on their crops until they can resume the harvest when the fields have dried out.

“How much impact from the rain may not be known for weeks to come.”

North Carolina is the largest sweet potato producer in the country, accounting for well over half of the national harvest. Last year, the 90,000 acres of sweet potatoes grown here were worth $346.5 million, according to the U.S. Department of Agriculture, trailing only tobacco, soybeans and corn. Most of the crop is concentrated in five counties just east of the Triangle: Johnston, Nash, Sampson, Edgecombe and Wilson.

The workers who harvest sweet potatoes will know right away in many cases if the crop has been submerged too long. A plow turns the mounded potato plants over, and a crew of workers follows, picking up good potatoes and leaving the bad. A waterlogged potato will be darker and soft.

The U.S. Food and Drug Administration considers food crops exposed to floodwaters to be unsafe for humans and also bars their use in animal feed unless they pass certain tests. But the rule applies only to creek and river flooding; excessive rainfall on a crop does not bar it from human consumption.

Scott says his workers picked about 20 percent of this year’s crop before the storm hit, which is more than most. Overall, about 90 percent of the state’s sweet potatoes were still in the ground when Florence arrived, despite a late flurry of work when Florence turned up in the forecast, said Allan Thornton, an N.C. Cooperative Extension agent based in Sampson County who specializes in fruits and vegetables.

That’s one difference between Florence and the previous big hurricane, Matthew, just two years ago. That storm arrived in October, when the majority of sweet potatoes had already been harvested. And despite similarly epic river flooding, Matthew was a different kind of storm, said Jimmy Burch Jr. of Burch Farms in Faison.

Matthew dropped all its rain quickly — about 16 inches around Burch Farms — then pulled out.

“The water came in so fast. It ran off quick and was gone.”

Florence took its time, dropping about 24 inches on Burch’s 4,400 acres of sweet potatoes over three days. By Sunday afternoon, after 18 inches had fallen, the fields appeared to be draining okay, Burch said. Then another six inches fell overnight.

“They’re not looking great at this point.”

“But with some sunshine and dry weather, we hope we’ll have minimal loses. When you’re a farmer, you’ve always got to be optimistic and hope for the best.”

In terms of livestock, Florence has already done more harm more than Matthew, which killed about 2,800 hogs and 1.8 million chickens and turkeys — about half of Florence’s toll so far. Matthew also did about $400 million in damage to crops, according to state Department of Agriculture and Consumer Services.

Sweet potatoes like well-drained soil, which is an advantage when heavy rains come. But the soil and elevation can vary from field to field and from one part of a field to another, Thornton said, so the crop damage can be spotty where water pools or doesn’t drain easily. Thornton:

“When you look at farmland in Eastern North Carolina, most of it looks pretty flat.”

“But when you get this kind of rain, you find every bottom, every low spot in the field. You can pick them out.”

Farmers usually begin harvesting sweet potatoes in late August, but they got started late this year because of a dry June. They were hoping to get a bit more rain to plump them up, said Kelly McIver, executive director of the N.C. Sweet Potato Commission, an industry trade group.

“We were just holding out for a little bit more rain. We weren’t expecting a hurricane to come through.”

McIver won’t venture a guesses on losses, but because North Carolina is such a big producer, she said, those losses could have a noticeable effect on price.

Jeff Thomas, marketing director at Scott Farms, said Thursday that a USDA report indicated that prices for a 40-pound case had gone up about 15 percent after the storm, to between $14 and $16. Whether that increase holds and how it gets passed along to consumers isn’t known.

Another effect of the storm is a break in the fall harvest time, now a week and counting. Farmers and their crews usually work in to November getting their potatoes out of the fields. A late harvest means a risk of a frost or freeze that can also ruin a crop, Scott said.

“It adds up to a lot of uncertainty.”

The North Carolina Sweet Potato Commission Inc. (NCSPC) is a nonprofit corporation made up of over 400 sweet potato growers along with the packers, processors and business associates that support them.
Related Topics
Potato Supply chainPotato Defects and DiseasesFood TrendsClimate ChangeDrones and Agricultural Sensors 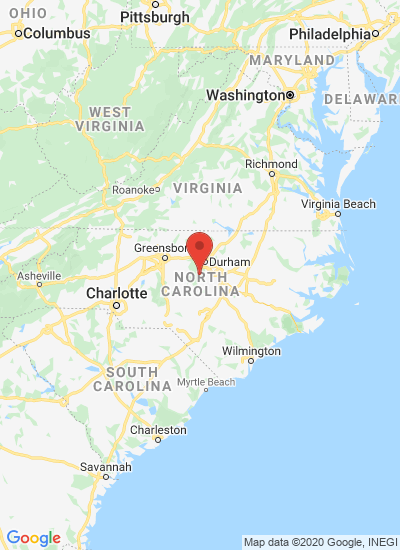