Aeroponics: growing potatoes in the air - agricultural innovation in Rwanda 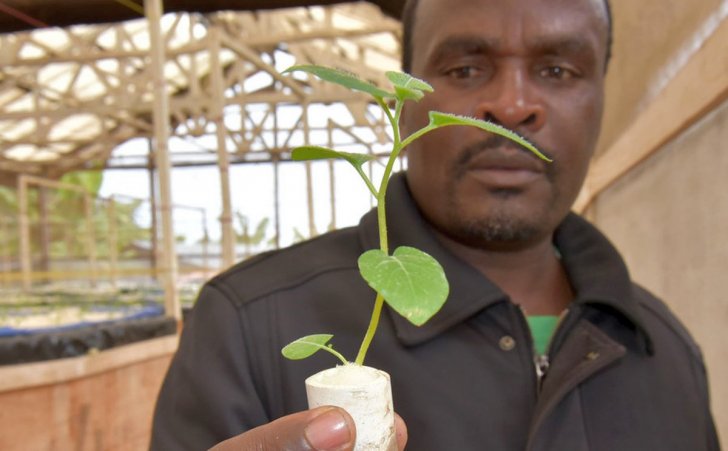 The Rwandan entrepreneur Apollinaire Karegeya is growing potatoes without soil and with little water.

Agriculture is embedded in the culture of the people of Rwanda. In fact, about 67 percent of Rwandans are employed in agriculture, with arable land covering over 1.56 million hectares of the country.

But with Rwanda's population set to rise from 10.5 million in 2012 to 16.9 million by 2032, demand for food will likewise soar. At the same time, the amount of arable land is likely to diminish with the country’s cities steadily expanding.

Agricultural innovations, that focus on ensuring higher productivity in smaller spaces, are needed if Rwanda’s agricultural sector is to continue meeting the food needs of the country. Enter a new way of growing food without soil and less water: aeroponics. 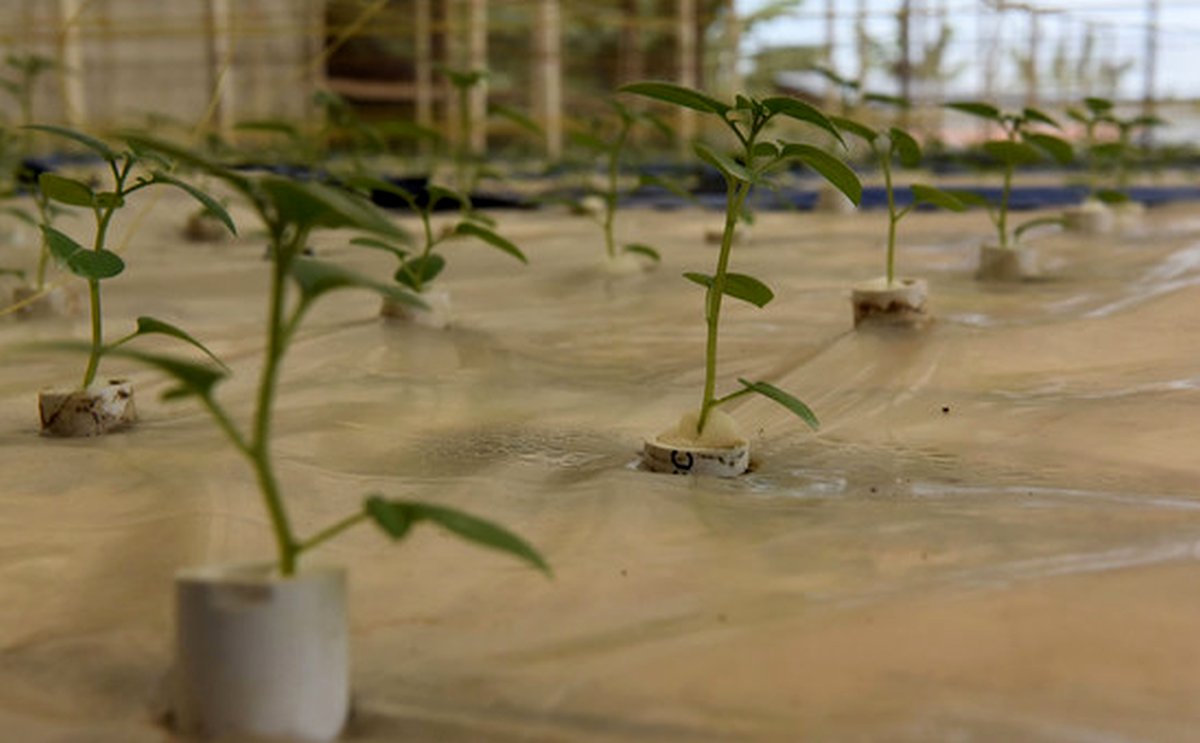 Aeroponics is a climate-friendly way of planting in which roots are suspended in the air and grow in a humid environment. No soil is involved. Instead, the plants are sprayed with water and nutrient solution. This technique enables farmers to control humidity, temperature, pH, and water conductivity inside a greenhouse.

A Rwandan entrepreneur is pioneering the use of innovative farming technology that, he believes, is set to play a major role in feeding the growing population in his country, amid increasing pressure on arable land.

No soil, barely any water, a controlled environment: for Apollinaire Karegeya, the advantages of aeroponics are clear. This is a sustainable technique for growing vegetables, in which the roots are suspended in the air, and sprayed with a water and nutrient solution.

Born into a family of potato farmers, Mr. Karegeya is a champion for this sustainable form of agriculture which, he says, prevents disease and increases productivity.

His business, supported by the UN's Food and Agriculture Organization (FAO), has been highly successful, leading many other Rwandan farmers to follow his lead, and attracting more young people with this exciting vision of a new, profitable way to cultivate crops. 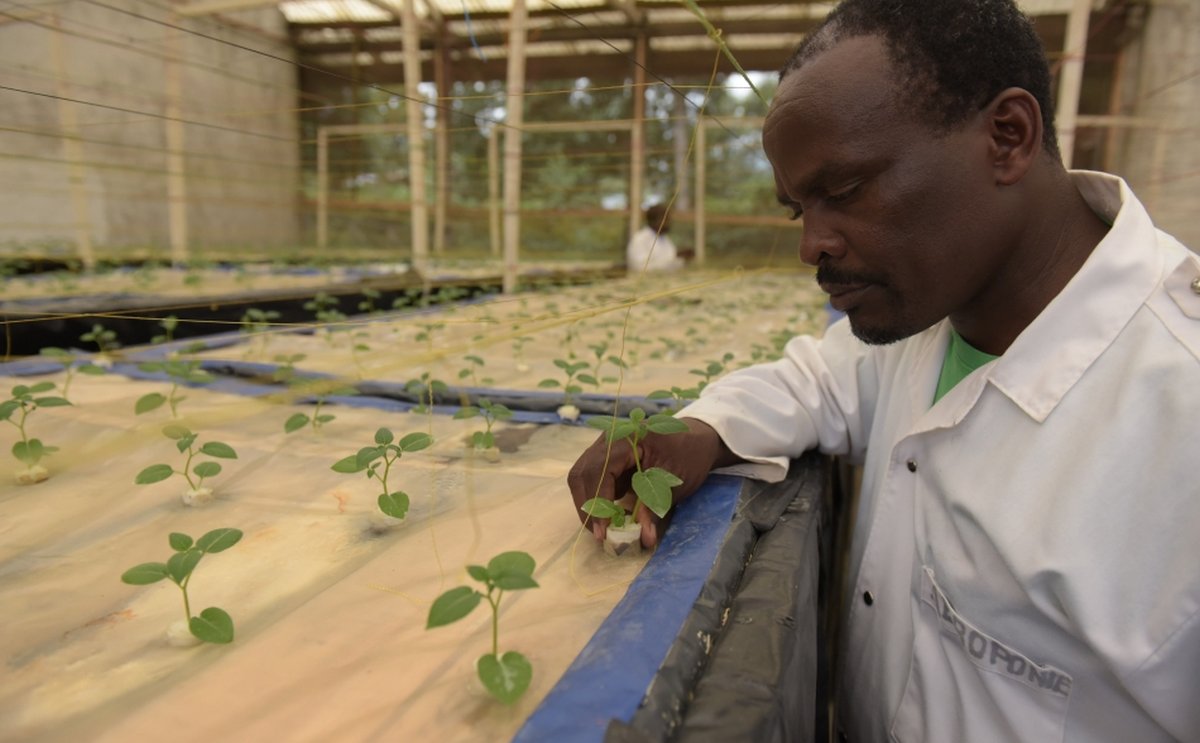 Apollinaire inspects the plantlets in the greenhouse. One plantlet produces between 30 – 50 potatoes.

When Apollinaire Karegeya found out about aeroponics, he recognized that it could increase food production and do so in a sustainable way. Apollinaire comes from a family of potato farmers, who have always practiced traditional farming.

But with low crop productivity due to the climatic conditions, he knew the difficulties of providing a secure source of food for his local community. Apollinaire was hungry for new skills and knowledge that he could use to improve his farm.

“I was amazed by this soilless technology. It prevents diseases and increases productivity. After the week-long training, I was convinced that this was going to be good.”

With further support from the government and its partners, Apollinaire began farming potatoes through greenhouse aeroponics in 2015 and has been a pioneer of the aeroponic system in Rwanda ever since.

Through aeroponics, he now multiplies potato seedlings, some of which he then plants on his farm to grow potatoes and others which he sells to other farmers to plant on their farms. Apollinaire grows about 2 500 plantlets in his greenhouse, which produces potatoes in 2.5 months.

“Since it is not rotational farming, I grow three times a year. When the nutrients are well regulated, you can be assured of the yield. This wasn’t the case with growing in open fields where you’re at the mercy of nature.”

When Apollinaire first started using this technology, he still had a lot to learn.

“Tubers grown from aeroponics are kept for four months before they can be transferred to gardens. I lacked storage facilities, and along the way, some potato seedlings would rot.”

In 2018, FAO, with funds from the European Union, implemented a project to improve the livelihoods of small producers engaged in the roots and tubers' value chains. It aimed at making production more efficient and linking smallholders to domestic and regional markets.

Through the project, Apollinaire was trained in improved potato storage techniques and how to work with financial institutions to boost his new business further. He learned to keep the potato seedlings in boxes when they are ready to be moved to soils so that they get enough air as they wait to be picked up by buyers.

Convincing Rwandans about the new way of farming

Growing food without soil is new to many Rwandans, so Apollinaire also faced the challenge of changing mindsets. With help and training from FAO, he began to use the media including radio, television, newspapers, and websites to spread the word.

Apollinaire has also trained his 20-year-old son in aeroponics, as well as 42 other farmers in Rwanda. As more farmers hear about the new farming techniques through Apollinaire’s media outreach, he believes it will increase food production. Eventually, farmers will be able to use aeroponics to grow other kinds of crops, such as vegetables.

“The Rwandan population is increasing. We have to think of technologies to increase the amount of food we produce. New innovations are changing the image of agriculture. More youth are attracted to engage in agribusiness because it’s no longer that backbreaking sector.”

With populations increasing and cities expanding around the world, innovative farming methods are exactly what’s needed to reinvigorate the agriculture sector. By encouraging more farmers to follow in Apollinaire’s footsteps, we can increase food security in a climate-friendly, sustainable way for all.