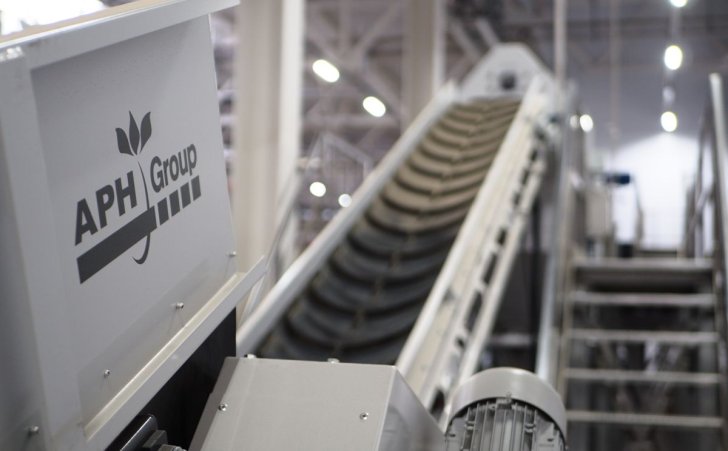 APH Group, a distributor of farm equipment, recently closed several multi-million contracts in China, Romania, and Saudi Arabia. APH Group will supply storage-, grading and washing installations for three new French fries factories. These projects will be installed and commissioned in various phases in the coming months by the local engineers of APH Group.

For the project in China, APH Group will install a bunker grading facility as well as a potato storage facility at a large Chinese potato producer and processor.

"As the consumption of French fries is rising significantly in China, our customer has chosen to invest in this segment of the market by expanding the French fries production. We will supply Wevano and Tummers grading washing installations, whereas we will also install Omnivent equipment and a significant number of Miedema machinery."

"On the other hand, our customers in Romania and Saudi Arabia are going to build completely new French fries factories to meet the local demand."

In both countries, it will be the first French fries factories in the country. All equipment and installations that APH Group will deliver are made in the Netherlands:

Steven Koop is looking forward to the follow-up and completion of the projects:

"Also in terms of these projects, our customers opt for Dutch quality with equipment from Wevano, Tummers, Miedema, and Omnivent, among others. Hence, we are very proud that these customers have chosen APH Group and our brands."

"Over the past months, our team has been very busy with the preparation and the detailed elaboration of these three major projects. In other words, a lot of time and effort has been invested, but we are very pleased that we have been able to conclude these multi-million contracts."

"From a business point of view, it is a nice end to a great year, as once again we have concluded numerous deals and projects worldwide. As a result, our turnover continued to grow whereas we have realized an outstanding financial result."

Wytse Oosterbaan is confident about the upcoming year:

"The current challenges in terms of the supply of various parts and components will probably require even more flexibility and creativity, but that’s the moment that we are going the extra mile. I am certain we will get it organized together with our suppliers."

Following these challenges, APH Group placed its stock orders even earlier in comparison with previous years.

"We have purchased even more stock machines for 2022, so we have secured the machines desired for our most important export markets. We are ambitious and want to continue to grow, hence we will put a lot of effort into making it a successful year again."

APH Group delivers and services machines and equipment to increase the efficiency of professionals in potato, vegetable and irrigation business.

Wevano is active worldwide in the development and manufacturing of machines and installations for both the agricultural and the industrial sector, including machinery for potato handling and sorting.

Miedema is a Dutch producer of machinery for storing, planting and grading of potatoes.