New potato varieties in Bangladesh for Chips and French fries: Valencia and Cartagena

Two potato varieties developed by the private firm ACI Seed are set to hit the seed potato market of Bangladesh next season, enabling farmers to produce potatoes suitable for making ready-to-eat snacks such as French fries, chips and flakes.

Typical potatoes like Diamond (white) and Asterix (red skin), which have been popular among farmers for more than three decades, contain a maximum of 18% dry matter – a key factor for potato processing to make the snacks.

But the new potatoes contain more than 22% dry matter, which makes them suitable for both industrial and regular consumption, according to ACI Seed. The names of the developed varieties are Valencia and Cartagena. ACI said it had developed the potatoes in four years of research after bringing the mother variety from the Netherlands.

The names of the developed varieties are Valencia and Cartagena. ACI said it had developed the potatoes in four years of research after bringing the mother variety from the Netherlands. The new potato varieties offer higher yields, low growing period, low post-harvest losses, more resistance to diseases and more dry content than the typical ones, according to ACI.

Although the typical potatoes are widely cultivated in Bangladesh, they are not of much use in the food processing industry due to their low dry matter content. Local food makers now meet their potato requirements by contract farming and imports.

Sudhir Chandra Nath, business director of ACI Seed, told The Business Standard that the company had been focusing on table potatoes so far. But with a shift of focus in the production line, now it is ready to distribute 100-150 tonnes of seed potatoes of these two varieties for the next season.

He said the firm is focusing on industrial grade potatoes so that the tuber could be exported after meeting local demand. According to official data, Bangladesh produced around 1.01 crore tonnes of potatoes in the last fiscal year. The country eats away around 70-75 lakh tonnes of potatoes per year, while the remaining are for exports and food-processing.

Leading local potato chip-maker Bombay Sweets says the launch of the new varieties is "good news" for them. Bombay now does contract farming in Bangladesh for the raw material supply. The company provides farmers with a potato variety called Courage, which contains enough dry matter to meet the production demand.

"We have to do it as we do not have quality potato supply as per our demand. It costs more."

He said if the local production of industrial grade potatoes is adequate to meet demand, the company will be able to be more cost-effective in input.

The average potato yield is 21 tonnes per hectare, while the average yield of these two varieties is over 35 tonnes. Besides, the growth time of the two potatoes is 60 days – lower than the 90-day harvesting period for the typical ones.

The country has an annual demand for 7.75 lakh tonnes of potato seeds. Only 10%-15% of this comes from the formal sector. Of them, the autonomous Bangladesh Agricultural Development Corporation (BADC) and private sector companies such as Brac, ACI, Supreme, Ispahani, Nil Sagar and Lal Teer supply the seeds. 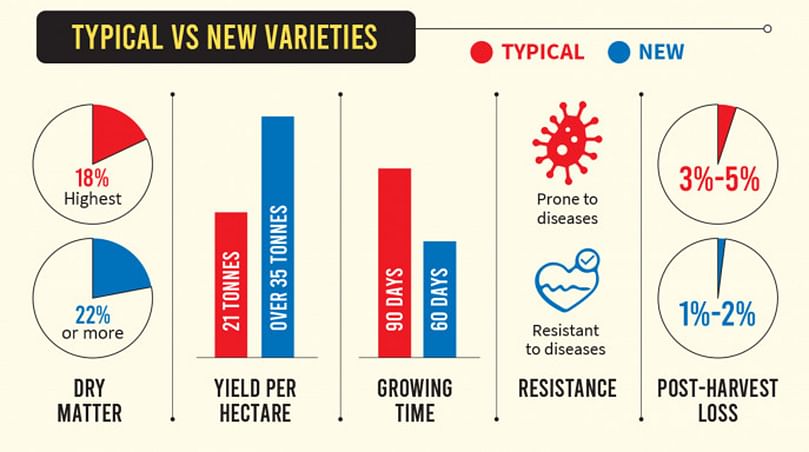 Diamond variety potatoes are whitish. Their productivity is declining gradually as the potatoes become more susceptible to numerous diseases owing to the ageing variety. The new variety Valencia (White) potatoes look like Diamond. But the variety is more disease-tolerant, as the yield is more than 35 tonnes per hectare. The size of the potatoes is also suitable for export requirements.

Similarly, Asterix (Red) can become an alternative to Cartagena (Red). Cartagena's average yield is more than 40 tonnes per hectare. Typical potato varieties post 3%-5% post-harvest and storage loss, while it is a maximum of 2% for the new varieties.

ACI said it has been able to come up with the varieties as the government has excluded potatoes from the list of "notified crop" for three years.

A crop belonging to the list means no new varieties of it can be introduced. The measure aims at protecting existing varieties of the crop, maintaining a steady supply of it to the market and safeguarding farmers in general.

The list now includes paddy, wheat, jute, sugarcane, kenaf and mesta. Excluding potatoes from the list targeted developing new varieties and trying them out at the grassroots level.

As a response to the favourable policy, 68 new potato varieties have been registered in the past three years, of which the Bangladesh Agricultural Development Corporation accounts for ten and ACI 21.

The BADC and the private sector are asking the agriculture ministry to continue the facility for another two years so that some more advanced varieties can be easily registered.

Abdullah Sajjad, General director of the seed wing of the Agriculture ministry:

"The deadline for potatoes expired in September this year. It has not been decided yet whether it will be included in the list again."

Bombay Sweets & Co., Ltd. (BSCL) is a name associated with consumers for snack food for more than 5 decades in Bangladesh and abroad.

Based in Dhaka city, BADC, an autonomous corporate body under the Ministry of Agriculture, serves to the whole of Bangladesh and has a nationwide network of outlying field offices down to the upazila level and at some places even below that level.

Supreme Seed, which is based in Bangladesh specializes in Production, Processing, Marketing and Breeding of field crop such as potatoes and vegetable seeds.

ACI Seed, a strategic business unit of ACI Limited is one of the largest crop seed producers and distributing company holding the first position among the private sector in Bangladesh contributing in the area of Research and variety Development

Lal Teer Seed Ltd. is the largest producer of seeds in the private sector in Bangladesh. It is a research-based company which develops and produces high yielding, both hybrid and open pollinated seeds
Potato varieties mentioned 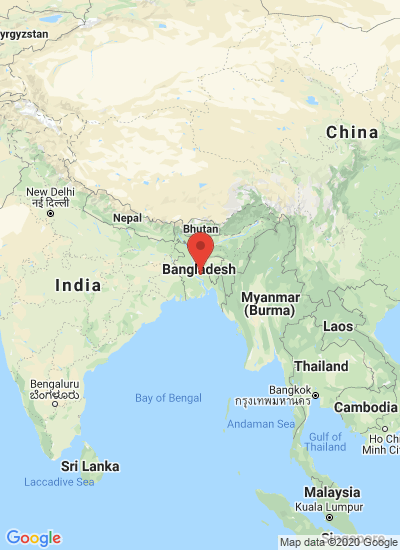