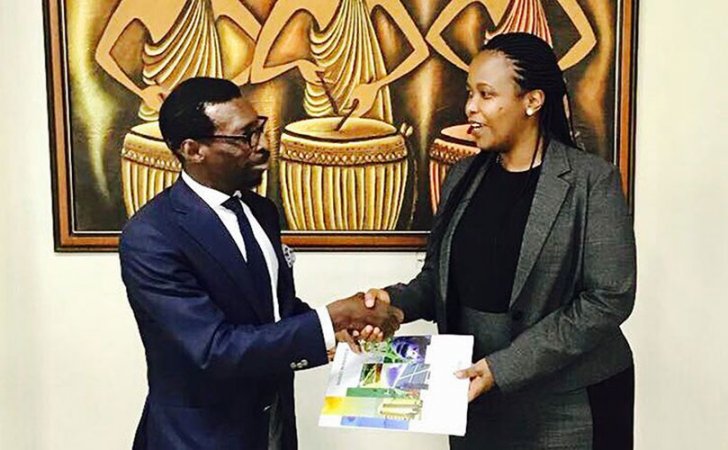 Olusegun Paul Andrew, the chairman of BlackPace Africa Group (left) and Clare Akamanzi, CEO of the Rwanda Development Board (right) exchange documents after signing the deal.

The government of Rwanda has signed a multimillion dollar deal with a Nigerian investor, the Blackpace Africa Group, to revamp and develop Rwanda’s potato industry and help make the country a key producer and exporter of potato products.

It is a new dawn for Irish potato growers in the country following the signing of a multimillion dollar deal between government and a Nigerian firm to develop the country’s Irish potato value chain. Under the deal signed last week between Rwanda Development Board (RDB), the ministries of Agriculture and Animal Resources, and Trade, Industry and EAC Affairs and BlackPace Africa Group, the firm will also set up two potato processing plants and boost production activities.

The five-year project worth $120 million (Rwf102 billion) involves building of two potato factories; one in the Kigali Special Economic Zone for frozen French fries, and another in Nyabihu District to produce potato products for the export market, according to Joseph Mugarulire, the director general of the National Industrial Research and Development Agency (NIRDA). NIRDA is supporting the project on research and trade issues.

The firm targets production capacity of 10 million tonnes of potato by the fifth year of the project, officials said. When it starts operations, it will process 80,000 to 100,000 tonnes of potatoes making frozen French fries (at the Kigali Special Industrial Zone-based plant), and potato flakes and crisps (Nyabihu plant) targeting export markets in Africa and the Middle East, according to Olusegun Paul Andrew, the chairman of BlackPace Africa Group.

“These efforts by Rwandan stakeholders and BlackPace Africa will help shape and transform the country’s potato industry, and that of the continent generally.”

To be implemented under the public-private partnership arrangement, the potato project will work to increase yield per hectare from 15 to 35 tonnes by the fifth year of operations, officials said. The government pledged to avail the investor more land for the cultivation of potatoes in Bugesera, Nyamagabe, and near Lake Muhazi, among others, on top of the 166,000 hectares already identified in Northern Province.

Rwanda is one of the largest potato producers in the region and currently produces 2.3 million tonnes of potato annually. Irish potato is one of the most important crops in Rwanda and is one of the government’s six priority crops falling under the Crop Intensification Programme.

Olusegun said the firm is already undertaking a similar project in Nigeria’s Plateau State where it is working with GIZ ASTC to engage over 5,000 farmers with over 500,000 hectares under the crop.

The project is expected to kick off in two months.

“But next month, our experts will come to gather soil data and weather pattern. We will also start trial tests for some varieties we are bringing.”

The firm will use the strategy of seed multiplication in Rwanda like it did in Nigeria’s Plateau State, arguing that buying from Europe is expensive.

“To plant 200,000 to 300,00 hectares one needs about 100,000 tonnes of potato seeds, which is quite expensive. So, we buy small quantities and multiply to get desired result over time and meet the McDonald's standards.”

“With this standard, our potato products will be competitive anywhere in the world and you can sell to McDonald's, the biggest users of potatoes as they drive French fries and frozen potato markets.”

“Therefore, quality of seed is very vital and it must meet McDonald’s standards. However, we will use tissues culture initially as an immediate seed multiplication approach, but this requires planting many seedlings to get the tonnage we are talking about.”

“In Rwanda, we want to increase investment, especially in infrastructure, mechanisation, irrigation, seed multiplication and processing to be able to boost exports of potato products that can compete on the global market.”

The $120 million initial investment will cover the whole potato production process, according to Olusegun. The amount will almost double when you consider activities along the value chain, the official said, adding that they are still working on their financial model.

He is buoyant that the project will be able to add about $500 million “right away” from export revenues of its three flagship products, frozen French fries, crisps and potato flakes by the fourth to fifth year of operations. He based the figure on the country’s current annual production level of 2.3 million tonnes.

However, returns from the project are seen hitting between $3 and $5 billion when potato production hits 10 million tonnes by the fifth year of the venture, according to Olusegun.

He added that potato growing can revolutionalise African economies and many countries are now looking at making the crop a key cash crop replacing traditional products like tea and coffee.

Previously, many saw no economic value in potatoes, but this changing rapidly across the continent, he added.

Olusegun, who was convinced by Rwanda’s envoy in Abuja, Amb Stanslus Kamanzi, about the potential of its potato industry, advised against what he called “academic like approach” employed by responsible government bodies while handling investors.

“We are here to invest not to do research, so it’s important to avoid this kind of approach because it slows business and may discourage some investors.”

“Once implemented, the new project will ensure cultivation of Irish potato in quality and large quantity, as well as the establishment and expansion of businesses engaged in potato value addition because adequate produce will be availed.”

There are currently two potato processing factories that make crisps – Winnaz in Musanze District in Northern Province, and another in Nyabihu District, Western Province.

The federation official is optimistic that the project will finance seed multipliers, a move which would help avail the required 10 million seeds targeted by the firm. Vincent Havugimana:

“This will also address the issue of uncertified and diseased seeds which farmers have been buying from unauthorised dealers.”

Why potato could be magic crop for Rwanda

According to experts, investment in the potato value chain is huge and global consumption of processed and raw potatoes has grown significantly, and has, presently, surpassed total rice consumed globally. That’s why we need a holistic approach to revamp the potato economy given its potential to boost export value, create jobs and drive GDP growth among others.

“This is a huge market, and the beauty of this has further reinforced our strategic plan on using potatoes as the right crop for Africa to leapfrog its agriculture sector from poor farming, living in abject poverty to real economic value as they begin to translate their wealth into real economic sense.”

At about 15-20 per cent of your economic power (agriculture), this is what can change the economic dynamics of Rwanda and East Africa, with Rwanda as market centre.

The investor said Washington State in the US earns about $7.5 billion per year from over two million tonnes per annum. If Washington State can produce $3.5 billion worth of potatoes, then you should be able to gauge the huge economic impact of what potato is to Rwandan economy.

“This is where we are coming in to make it work, bringing top level experts from the Netherlands, a key potato growing country; have partnership with ASTC, an Israeli-Nigerian company, for seed multiplication, GIZ they also coming in…need to work with cooperatives which GIZ can help us on as they have the right tools to engage farmers; you don’t want to invest and a farmer sells to your competitor and hurt your investment.”

“All the participating farmers will be trained on the new potato varieties that can compete globally and give desired economic gain, as well as on mechanisation.”

“We will work with them to increase yield per hectare and also help on the issue of standardisation and certification.”

“This is not good for business. Farmers will also be assisted to access affordable funding and seeds.”