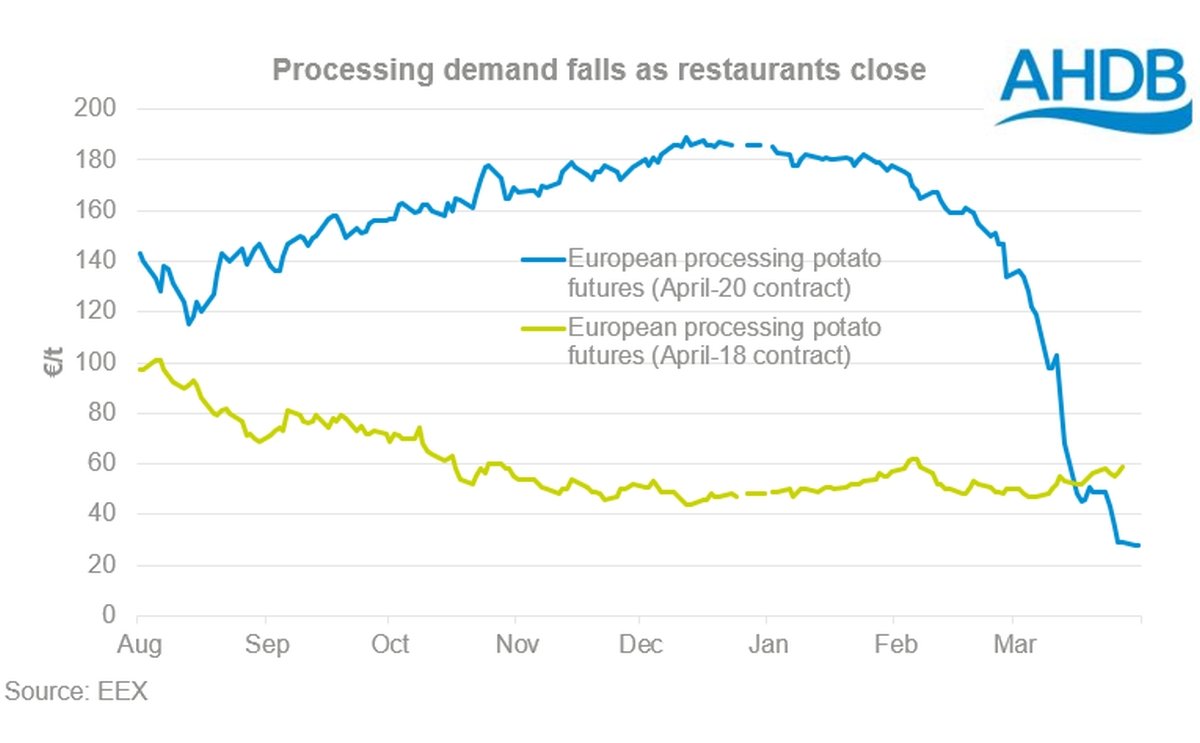 The potato futures (EEX) indicate the extent that the demand of potatoes for processing has fallen.

The situation in mainland Europe closely echoes current trends in the UK. Fresh retail sales have been reported to have increased significantly and potatoes are moving from countries such as France and Germany to help meet demand in eastern Europe. Meanwhile the widespread closure of restaurants and other food service outlets has meant that demand for processed potato products has fallen significantly.

This has been reflected in the April 2020 potato futures contract with prices falling over €100/t since the start of March to close at €28/t at the end of the month. This has even fallen below the equivalent futures prices equivalent contract in the oversupply year of 2017/18. Physical movement is now limited to contracts with free-buy sales almost non-existent.

Processed products - Scale down or store?

The loss of such a large end market for processed products has led to many factories shutting down lines and scaling down production. This is particularly the case for lines producing fresh chips and other products which are harder to store for any length of time. Production is continuing for frozen products, for the time being, and retail sales of frozen products are expected to increase due to the public stocking up on non-perishable foodstuffs.

However, retail sales only make up a small proportion of total sales and even with a potential increase it will not offset loses. Using the Netherlands as an example, according to a recent press release by the Dutch Processors Association (Vavi) approximately 80% of its members output is sold into food service. Over the next four months (April-July) Dutch processors produce on average 581Kt of pre-cooked product. This means that if factories were running at full capacity there could hypothetically be up to 486Kt of product that would be left without an end market.

Another outlet is exports with significant proportion of both Dutch and Belgian production normally exported both within the EU and globally. However, within the EU and several key Asian markets restaurants are closing in an attempt to slow the spread of coronavirus.

In light of this, processors are left with two options; either store frozen products for sale when the situation changes or scale down production to meet retail demand. The first option is viable, but reports suggest that stores are already reaching capacity. The second has been accomplished by slowing production and pushing back contract supplies to later in the season wherever possible and hoping that the market situation will have improved by then.

Globally the quantity of frozen products in store is likely to increase as processors in Europe and North America are unable to find an outlet for supply. This is likely to weigh on values when trade resumes as producers compete for export share.

However, for the UK it may not result in a significant boost in import volumes. The UK imports large volumes of frozen potato products bringing in an average of c.491Kt a year (2015-2019). Over the past 19 years there is no significant trend to show that a decrease in value per tonne translates to higher volumes entering the country.

The UK imports large volumes of frozen potato products bringing in an average of c.491Kt a year (2015-2019)

While processors scale back production there remains a significant volume of potatoes which are unable to be sold into a market. The lack of free-buy sales means that anything remaining which is surplus to contract is left in a position with limited options. Equally the current situation means that should processors run out of storage for frozen products then they may be unable to utilise the full volume of contracted supplies.

This is a worry with the French alone estimating that around half a million tonnes of processing potatoes will be left at the end of this season unable to be sold. There is an attempt to utilise these volumes in starch production and anaerobic digestion but for some the price paid is less than the cost of haulage.

The impact of this large surplus of processing potatoes across Europe is likely to bleed into next season. We are already hearing reports of processors on the continent scaling back early areas to allow for as much old crop to be processed as possible.

In addition, with the uncertainty set to continue and high stocks of finished product it seems likely that for the first time we could see the processing area in the big 4 (France, Germany, Belgium and the Netherland) decline next season.
Fuente
AHDB Potatoes
¿Te gustaría recibir noticias como esta por correo electrónico? ¡Únete y Suscríbete!
Empresas Relacionadas