West Australian seed potato farmer Alan Parker, who may be forced to quit the seed potato industry as a result of the tomato potato psyllids found in Western Australia.

Alan Parker looked out onto the farm business he had spent his entire life establishing. The West Australian seed potato grower will know in the next six weeks whether his lifelong career will continue.

"It's more than soul destroying.”

“[Farming] is something that we've done not just because I wanted to but because I get a reward for it, financially and personally.”

Usually at this time of year, Mr Parker's farm would be busy and in the middle of harvesting his most valuable crop of third-year seed potatoes to send to South Australia.

But this year, due to the tomato potato psyllid outbreak in Western Australia, which has resulted in strict interstate trade restrictions, he has had to make the tough decision not to harvest them.

“From the point of harvest the cost just keeps escalating.”

“So why put them in the bin? Why harvest them and just add more costs to the issues you've already got?”

Alan Parker has been advised that from May 15 his South Australian buyers will not take produce from him, forcing him to feed the crop he has spent four years producing to his livestock.

“It's mind-boggling; it's more than stressful because, what do you do?.” 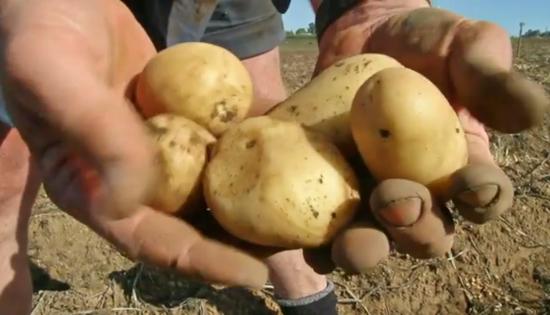 The tomato potato psyllid was first found in Western Australia in February in the metropolitan area.

It has since been found to be widespread across the state, although has still not been found in the Albany region nor has it been found on Mr Parker's property in Manjimup.

Last week the Department of Agriculture and Food Western Australia declared the pest manageable but not eradicable and will now work with States and Territories to enforce a 12-month management plan, to be delivered on June 1.

For Alan Parker, however, if there's no guarantee of trade being reopened by June 1, he will leave the industry.

“If the size of our operation downsizes it's just going to be unviable.”

“There's no point trying to roll the dice again."

Mr Parker is not the only seed potato producer who has had to make costly, difficult decisions as a result of the trade implications.

West Australia's largest seed potato producer Colin Ayres, who is also the chair of the Seed Potato Growers Association of Western Australia, has just informed over half of his full-time staff they will not have a job in two weeks' time because he is halving his production.

“That's a pretty tricky job for them to now have to go and explain to their families that they're losing their job because we've been quarantined for a bug that doesn't occur in Albany.”

Further to that he said it would have flow-on implications to ware potato (edible) growers, who would now be competing with an oversupplied WA market.

“On the domestic eating market here in Western Australia there will be a depressed price, analysts would say by $100 a tonne is not unreasonable.”

Mr Ayres said even if interstate trade was to resume, the change of Zebra Chip, the crop-destroying bacteria associated with the psyllid, being found in WA would make interstate buyers reluctant to buy off WA into the future in case trade restrictions would be reinstated.

For Mr Parker, the repercussions of a problem that he initially thought would be fixed by now are starting to hit home.

“I've got a young son who has just turned 13 and he's madly wanting to follow in my footsteps.”

“But in saying that, him wanting to do it and him being able to do it is a different story today.”

“If he'd asked this time last year I would have said he can no doubt follow in my footsteps, but I cannot give him a problem like this at the moment.”

With two weeks until he completely loses the market for his $300,000 crop from this year into South Australia, Mr Parker has made a desperate plea to government authorities to help him and other producers.

“I would hope [WA Minister for Agriculture] Alannah MacTiernan could see some light at the end of the tunnel and go and bat for us or some Federal Minister, like Barnaby Joyce, could realise the urgency of this situation.”