Impression of Interpom | Primeurs 2018: an increasingly international attendance covering all aspects of the potato supply chain.

Despite a 2018-2019 potato season fraught with problems as a result of an exceptional drought and heat, an impressive 19,508 visitors attended the fair.

The last edition is the illustration of an increasingly professional potato chain. The bond between the different players in the chain is clearly strong, even in difficult times.

Strong bond between the different players in the potato chain

INTERPOM PRIMEURS has been bringing potato professionals from all over the world together at Kortrijk Xpo for 25 years. The trade fair has expanded from occupying two halls to now being sold out one month in advance with 326 exhibitors from 15 countries representing the entire chain: from growing to processing and marketing.

No less than 24% of the visitors come from abroad with a strong turnout from the Netherlands and France, and increasing numbers from other European countries and even from the other side of the world with visitors from Japan, Peru, Australia, Canada, USA, Brazil.

After an extremely difficult 2018-2019 potato season as a result of the exceptional drought and heat, the entire sector gathered together in Kortrijk Xpo. Not only to view the many innovations, but also to have exchanges with the various players in the chain. And to find solutions to the challenges of today and tomorrow with which the agricultural and horticultural sector in general and potato farming in particular are confronted.

Of course, everyone was talking about problems such as contracts, quality and volume, storage and others. But it soon became clear that consultations between buyers and sellers had in most cases resulted in acceptable solutions and that the bond between the different players within the chain is still strong.

The past edition illustrates more strongly than ever before that we have an increasingly professional potato chain, which evolves with the global demand for potatoes and potato products and the strong growth of the chain in the Benelux.

After all, Belgium and the Netherlands lead the way in the world of exports and the innovations associated with this in the field of growing, processing and subcontracting. This manifested itself not just on the stands, but also in the side events of the fair.

In addition to the extensive range of exhibitors and the numerous networking opportunities, INTERPOM | PRIMEURS also offered ‘walk in seminars' on the exhibition floor itself.

Under the supervision of moderator Dr. Jacques van Outryve visitors were able to attend interactive sessions given by Dutch and foreign speakers. Did you miss these fascinating sessions? You can download the presentations on the website of INTERPOM PRIMEURS under the heading 'programme - walk in seminars'.

Unfortunately, it turned out to be too soon to baptise the Belgian Potato Sector Organisation at this edition of INTERPOM PRIMEURS. But all conversations with visitors and exhibitors illustrated the need for further dialogue within the potato chain.

Can you imagine a world without potatoes?

INTERPOM PRIMEURS had the great privilege of playing host at the launch of the worldwide campaign 'Can you imagine a world without potatoes?' and using the slogan for the theme of this edition.

The objective of this campaign is to strengthen global awareness about the importance of the potato for humanity. 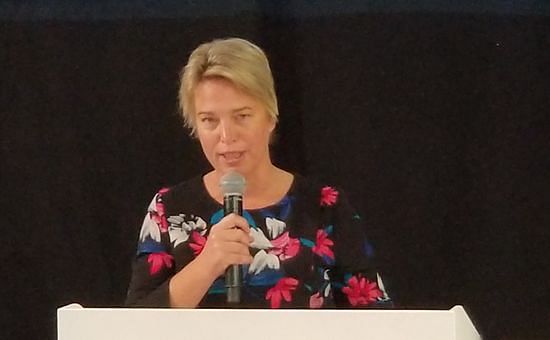 Flemish Minister of Agriculture Joke Schauvliege also attended the launch. In her speech she highlighted the fact that the potato is not only a nutritious, tasty and healthy product, but also an important economic and export product for our country. And that it merits promotion worldwide.

PotatoPro is proud to be the exclusive online media partner of the campaign 'Imagine a world without potatoes'.
You will hear more on this shortly
The focus on TRIAS development projects in South America also reveals that the sector is particularly attentive to the potato sector in developing countries. The private-public cooperative venture that was set up as a part of this offers numerous opportunities for companies operating within the chain.

Make a note on you calendar!

The next edition of INTERPOM | PRIMEURS is scheduled for 22, 23 & 24 November 2020 at Kortrijk Xpo.
Source
Interpom | Primeurs
Like to receive news like this by email? Join and Subscribe!