NewCold has unveiled its newly-completed expanded deep frozen storage and distribution centre which, says the company, is now the largest of its kind in the United Kingdom.

At the grand opening in Wakefield, customers, dignitaries, staff and well-wishers gathered on the 16.5-acre site to mark the occasion and hear from NewCold’s Country Director, Jon Miles, regarding the impressive facts and figures surrounding the new storage and logistics facility.

“and the opening of a food-handling facility which, in terms of size, performance, sustainability and low energy consumption, raises the bar to new heights – until now, not seen in the UK.”

The Wakefield plant will handle 3,000,000 pallets annually and with a total volume of over 4 million cubic metres, the giant deepfreeze has the capacity to store 143,000 pallets - at a constant, minus 23 degrees. 175 pallets come in and out every hour and just five minutes is required to unload NewCold’s bespoke-designed moving floor trailers.

Featuring some of the most advanced automated technology of its kind anywhere in the world, the NewCold plant is fully automated and minimal handling maintains product temperature, at all times. The operation is driven by Davanti software which has been improved year on year specifically to get optimum use of the automation. Furthermore, the dispatch bays are deep-frozen, whereby many conventional stores are chilled.

“Not only does the facility operate at around 50% of the energy consumed by conventional deep-frozen storage sites but also, given the proximity to the motorway network, 90% of NewCold’s delivery points can be reached and returned from within a driver’s shift. This improves customer service and keeps ‘food miles’ to an absolute minimum.”

NewCold’s founder and CEO Bram Hage commented on the ‘challenges’ met and overcome by the NewCold team during the development and growth of the Wakefield site and referenced similar greenfield projects undertaken by NewCold elsewhere in the world.

“This is the coming together of talented people, both from NewCold and our many supply partners and customers, to formulate a truly global consolidation of skills and recourses in the supply chain.”

Also addressing those present, Mark Slaughter, Director General for Investment at the Department for International Trade, highlighted the importance of ongoing commercial partnerships between the UK, the Netherlands and the numerous other countries in which NewCold has established similar cold storage and logistics operations. 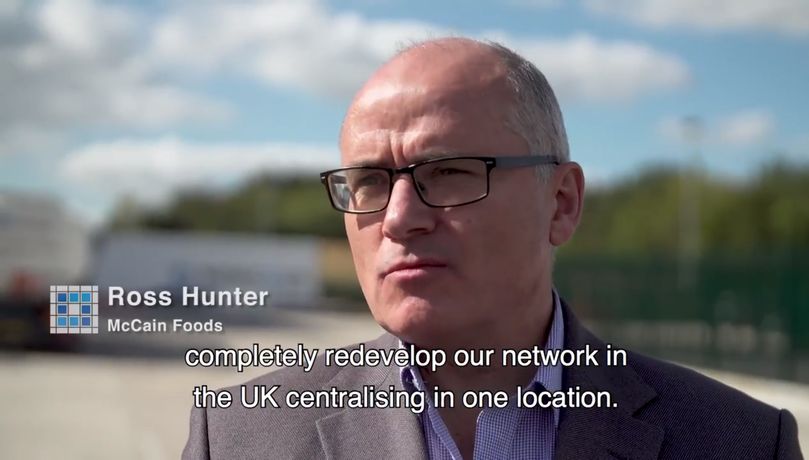 Opening of the NewCold Extended Cold Storage in Wakefield, UK, with comments by McCain Foods, one of the tenants of the facility.

Mark Slaughter, Director General for Investment at the Department for International Trade:

“I am delighted that the Department for International Trade, working in partnership with Wakefield Council, has been able to support NewCold to deliver a truly world class facility bringing over 200 highly valued jobs to the area.”

“I know that the completion of this site is just the start for NewCold and our international economic department stands ready to help the company further expand their UK presence.”

While overhead, NewCold Logistics advisor Tom Cassells treated the crowd to an aerobatic display and ‘fly-by’ in his single-seater, Cap 23 aerobatic plane.

“It was a fitting conclusion to a great afternoon.”

“From the start, Denise Jeffrey and Wakefield Council have helped greatly, including 3 years ago with the introduction of many new recruits – 75% of whom, I’m pleased to say are still with us and remain part of our 200-strong team.”

Jon went further to say that NewCold has so far committed around £100m on build cost alone, and their growth plans over the coming two years will see further investment, including the recruitment of an additional 70 personnel.

The NewCold logistics operation expands in line with their core business and so far, comprises 50 tractor units and 80 temperature-controlled trailers - many of which are high-volume double-deckers with auto-loading.

One of the NewCold customers is french fry manufacturer McCain Foods (GB).

“Having the NewCold facility in Wakefield has allowed us to completely redeveloped our network in the United Kingdom centralising in one location.”

“We got rid of our local factory warehouse and moved it all into here, so it's very, very effective for McCain.”