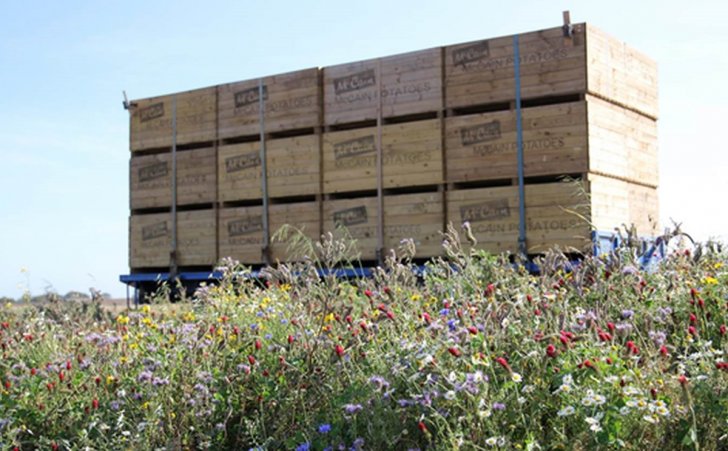 Sowing wildflowers into potato crops could reduce aphid-carried viruses and offer an alternative to declining access to insecticides for growers.

In Scotland, trials are being carried out to discover the effectiveness of growing flower strips in tramlines and headlands to promote natural predator populations to reduce pests as part of an Integrated Pest Management (IPM) strategy.

Jim is the current AHDB Strategic Potato (SPoT) farm host and, with AHDB, Eric, and Colin Herron, and Colin Ross from McCain Potatoes is looking at different sustainable measures as part of the four-year SPoT farm project.

“The trade for Scottish seed potatoes is reliant on an excellent reputation for virus health, and with the pressures of reduced access to insecticides, whether through regulation or greater resistance in aphids.”

“It is more important than ever to look at how we can use biology and targeted chemistry to keep disease at a minimum. There is a lack of a holistic approach to IPM which integrates both the traditional and modern tools.”

“Through these trials we are exploring the roles biology, ecology, and evolution play and how we can rethink aphid and potyvirus control on a commercial scale.”

The virus incidence in 2019 seed potatoes crops hit a 20-year high and this season's inspections give a similar impression for 2020. The main culprit is Potyvirus, PVY, principally the PVYN strain, but PLRV has also increased albeit from a very low base.

PVYn is causing the greatest concern, according to Eric, and pyrethroid insecticides are under review by regulators.

Furthermore, it is likely that the continued widespread use of pyrethroids will risk selecting for pyrethroid resistance or shifted sensitivity at field rates in non-colonizing aphids. There is also mounting pressure from retailers for environmental stewardship that promotes biodiversity and reduces chemical use.

Inspired by research at Rothamsted into integrating wildflowers into carrot fields and by the work of Matthias Tschumi in Switzerland on the complementary benefits for potatoes, Eric has identified species such as cornflower, common vetch, and yarrow as highly effective in attracting natural enemies of aphids. These are low growing plants that measure the same height as the potato crops.

At Milton of Mathers, 3m-wide strips of this mix have been drilled between the tramlines, creating floral food resources and a refuge habitat attractive to hoverflies, lacewings, and ladybirds.

“This will create corridors closer to the crop, increasing biodiversity in a move away from a monoculture system with its high reliance of chemical controls and creating greater impact as the predators are closer to the pests.”

“We are still refining, to assess whether the species were sown and sowing dates have an impact on the value of the strips and whether it supports the types of natural enemies needed to control potato pests and to deliver them to the crop when needed.”

“It has long been recognised that aphids are preferentially attracted to light reflected from the soil in blank beds and the contrasting neighbouring plants.”

“Sowing wildflower mixes or alternatively spreading straw mulch in these blank beds are practical mitigation techniques for an early generation – FG2 and FG3 – seed growers, with a disproportionately higher number of separation zones between the numerous seed stocks.”

The effectiveness of the strips in boosting pest control strongly depends on their botanical composition. Often non-crop elements that are designed for bird or pollinator conservation do not simultaneously make resources available to biological control agents.

Tschumi's research showed that of the three natural enemies, hoverflies increased the most in the strips compared to surrounding potatoes, while the populations of lacewings and ladybirds also rose significantly.

Eric warns that there is a lag period until natural enemies have time to build numbers, therefore an IPM approach using both nature and chemicals such as mineral oils will be important.

As part of AHDB's SPoT farm, other research at Milton of Mathers includes looking at haulm desiccation using both chemical and mechanical control combinations; as well as sustainable PCN management. With medium soil types, the potato crops are grown on a combination of owned and rented land aiming for a seven to eight-year rotation.

Other collaborators in the wildflower evaluations include Alan Johnson at Kings (Frontier) who supplied the seed at Milton of Mathers, as well as a similar project run by Kingdom Farming, near Glenrothes, Fife, and David Parish from the Game and Wildlife Conservation Trust (GWCT).

Scottish Agronomy Ltd was established in 1985 by a group arable farmers with the objective to produce, gather, interpret and disseminate technical agronomy information, solely for the benefit of its members
Related Topics
Potato Supply chainPotato CultivationCrop ProtectionPotato Defects and DiseasesPotato VirusesResearchAphids