P.E.I. Agriculture Minister Darlene Compton introduced legislation this week that would give her the authority to restrict what crops can be grown in areas where potato wart has been discovered. (Source: Legislative Assembly of P.E.I.)

The minister of agriculture of Prince Edward Island (PEI), Canada has tabled legislation that would give the provincial government a lead role in trying to prevent the spread of potato wart in the province.

If passed, An Act to Amend the Plant Health Act would give the minister Darlene Compton the authority to prohibit or restrict the planting of certain crops within an area of a field where a regulated disease has been detected, for up to 20 years.

On Wednesday Compton said her department plans to prohibit the planting of potatoes, tomatoes or any kind of root crop in specific areas in fields where potato wart has been detected — known as index fields.

Currently, under the potato wart management plan administered by the Canadian Food Inspection Agency, wart-resistant varieties of potatoes can be planted in those fields five years after the detection of potato wart.

Compton said that would still be allowed except in the specific area of the field delineated under the legislation where potato wart was detected.

"Producers could grow "grains, oilseeds, corn, soybeans. Any other crop that you're not actually bringing soil up out of the earth and having that adhere to the crop."

There have been calls for those fields to be taken out of production completely. Compton said her department had considered allowing only trees to be planted in those areas. But she said this new approach, which she said is used in Europe, will help destroy potato wart spores.

"Plant the field with something else, and when the soil is turned over, about 85 per cent of the potato wart spores are exposed to air and germinate. But if they don't have a host to adhere to, they die within a very short time." 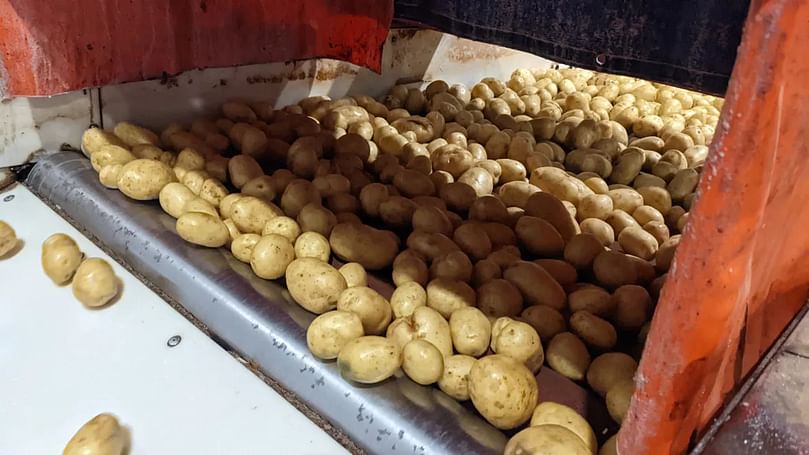 The U.S. border reopened to some P.E.I. potatoes in April. (Courtesy: CBC)

Compton said the new plan should allow P.E.I. to control the spread of potato wart, and possibly eradicate, is the goal.qqb Border closed last November

One year ago, the Canadian Food Inspection Agency suspended the export of fresh P.E.I. potatoes to the United States and its territory of Puerto Rico following the discovery of potato wart in two Island fields. Potato wart is a fungus that disfigures potatoes so that they are unmarketable, and reduces yields, but poses no health risk to humans.

That decision brought to a sudden halt exports that are usually worth about CAD 120 million per year to the P.E.I. economy. An investigation by CFIA has been ongoing since then. The border reopened in April, but not to seed potatoes from P.E.I.

Liberal MLA Robert Henderson had been calling for the province to buy up index fields to take them permanently out of production. Henderson said he's not opposed to the current plan, but worries that, where any tillage is involved, soil could spread on equipment to other fields, thus potentially spreading the fungus.

"Hope that the trading partners that we're dealing with would be consulted and [it would be] confirmed that cereal production would not be something that would impact potential trade embargoes or decisions later on."

Compton said the province is working with CFIA on its plan, and that CFIA is in contact with regulators in the U.S.It was CFIA that implemented the ban on P.E.I. potato exports. At the time it said it was a pre-emptive move to avert a ban being implemented by the U.S., which would be more difficult to lift.

A draft report from the United States Department of Agriculture's agency — the Animal and Plant Health Inspection Service (APHIS) — was made public last month, as part of a consultation process south of the border. It examines the ways that potato wart could potentially be introduced into the United States from P.E.I., through seed potatoes, potatoes for consumption and soil.
Source
CBC news
Like to receive news like this by email? Join and Subscribe!