New potato variety in India, Kufri Lima, to take on the heat...

Potato farmers in India can expect higher yields and profits with the release of a new variety, Kufri Lima.

Developed in collaboration with the International Potato Center (CIP for its acronym in Spanish) and the Central Potato Research Institute (CPRI), Kufri Lima, proved to be both early, heat tolerant and virus resistant, preferred traits by local farmers.

It is the first CIP clone recommended for release in India. Earlier CIP germplasm was crossed with CPRI parents resulting in the release of eight varieties since 1975.

Mohinder Kadian, a CIP Regional Research Scientist based out of New Delhi:

“Farmers usually have to wait until temperatures drop to plant potatoes, but because of its high tolerance to heat Kufri Lima can be planted a full 20-30 days earlier than other local varieties.” 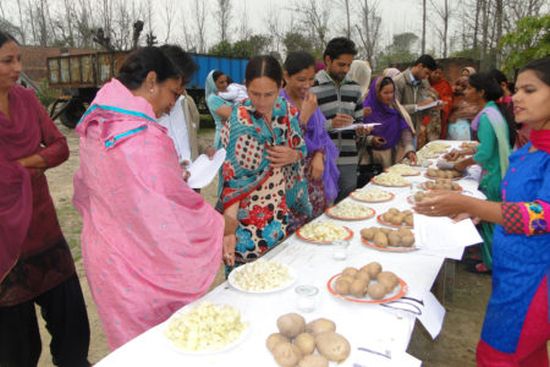 Earlier planting means earlier harvests, giving Kufri Lima farmers the ability to sell their potatoes at a premium price before other varieties hit the market.

“Farmers can expect to be paid 40 to 50 percent higher prices than farmers harvesting potatoes during the normal season.”

“An added benefit to these farmers is that the early harvests give them a productive window to plant an additional winter crop, such as wheat or rice, that other varieties don’t allow.”

“Kufri Lima farmers can invest their earnings into a second winter harvest helping them to improve the overall productivity of the cropping system.”

Potato virus is a serious problem for farmers in India, particularly in Gujarat, Rajasthan, Madhya Pradesh, Chhattisgarh, Odisha, West Bengal and East Uttar Pradesh, where temperatures are higher in the winter season.

Crop losses range between 20 to 50% depending on the seed quality and virus infection. To access quality seed farmers from these areas need to import from seed producing states in Northern India (Punjab).

“High transportation costs means that marginal farmers must pay two to three times more depending on distances for the same seed than what people pay in North India.”

“This adds to the cost of production decreasing the economic benefit for farmers. Kufri Lima has a low degeneration rate because of its extreme resistance to both PVX and PVY viruses.”

“This allows farmers to use this variety for two to three generations. Saving seed from one harvest to the next will result in significant savings for farmers. They will no longer lose profits purchasing seed each year.”

Seed multiplication of Kufri Lima will start in the coming weeks by CPRI.

“Five years from now we fully expect to see a significant area of Kufri Lima planted by farmers in India.”