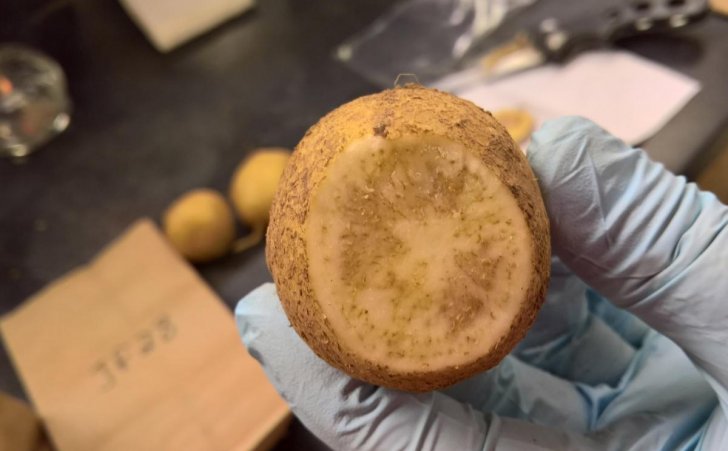 A potato infected with zebra chip presents with dark brown rings that are not harmful to humans, but do cause market losses.
(Texas A&M AgriLife photo by Dr. Fekede Workneh)

The Texas A&M AgriLife Research plant pathology team in Amarillo intentionally infected potato plants with psyllids positive with the bacterium that causes zebra chip, a deadly disease plaguing the potato industry for the past 15 years.

The outcome is some promising germplasm that will help in the battle against the costly disease, said Dr. Charlie Rush, plant pathologist.

Rush and Dr. Fekede Workneh, senior research scientist, conducted the study funded by a grant from the Texas Department of Agriculture to look for potato varieties that have some resistance to zebra chip bred into them.

“If potato varieties with genetic resistance can be identified, growers will have another tool in developing a comprehensive integrated pest management program to battle against the disease.”

The battle against zebra chip of potato began in South Texas in 2000, and by 2006-2008, damage caused by the disease in the Rio Grande Valley, Pearsall, West Texas and the High Plains reached into the millions of dollars annually.

However, early on, no one knew what was causing this devastating disease or how it was spreading so quickly, Rush said. While the disease was not harmful to humans, the discoloration it caused prompted the potatoes to be discounted going into the market.

Today, Rush said producers can only reduce their losses to zebra chip by controlling the psyllid with multiple applications of insecticides.

“This has prevented the catastrophic losses experienced by growers in the mid 2000’s but is very expensive and doesn’t provide growers with the number of management options they typically have available when dealing with other insect and disease problems.”

However, the industry is looking to research teams such as AgriLife Research’s to find more efficient and economical methods to battle the disease, Rush said. One such method would be to find potato varieties with a resistance to Lso, or to the psyllids that transmit the pathogen from plant to plant.

“The germplasm from Dr. Novy is very wild and often the tubers from these plants look nothing like what is available in the grocery store, while the materials from Dr. Miller’s program are advanced in the breeding process and much nearer to commercialization.”

“Obviously it would be great to find something from Dr. Miller’s advanced lines that had good resistance, but finding anything with strong resistance, even in the wildest germplasm, bodes well for availability of resistant varieties in the future.”

“We planted them in tents at the research farm near Bushland, with four plants per tent and replicated each tent twice under center pivot.”

“Positive-testing psyllids raised in the greenhouse were placed in the tents – six per plant – after flowering.”

He said the psyllids were left on the plants for a week and then an insecticide was applied.

“Normally after potatoes are infected, symptoms will show within a month, however, under this study, the potatoes were left for about 50 days to ensure anything infected would be exhibiting symptoms.”

The potatoes were dug up and sliced and then rated visually for tuber symptoms on a scale from 0-3 with 0 meaning no infection and 3 being the worst, he said. After they were rated visually, the slices were molecularly tested for titer levels – how much bacterium concentration the potato contained.

“The severely infected potatoes will actually go down in titer level after a period of time, but only because they degrade rapidly if they initially had high titers.”

The results have all been gathered, and he said the study resulted in some promising germplasm in the battle against zebra chip, especially three or four lines from the Texas A&M program and one or two from the USDA. All of these will need to be further field tested to verify the 2016 results.

Workneh said the results will now be passed back to the breeders for further inclusion in their breeding programs.

“Although the process seems painstakingly slow at times, it is necessary to provide the public with the high quality produce they demand, and to which they have become accustomed in the United States.”