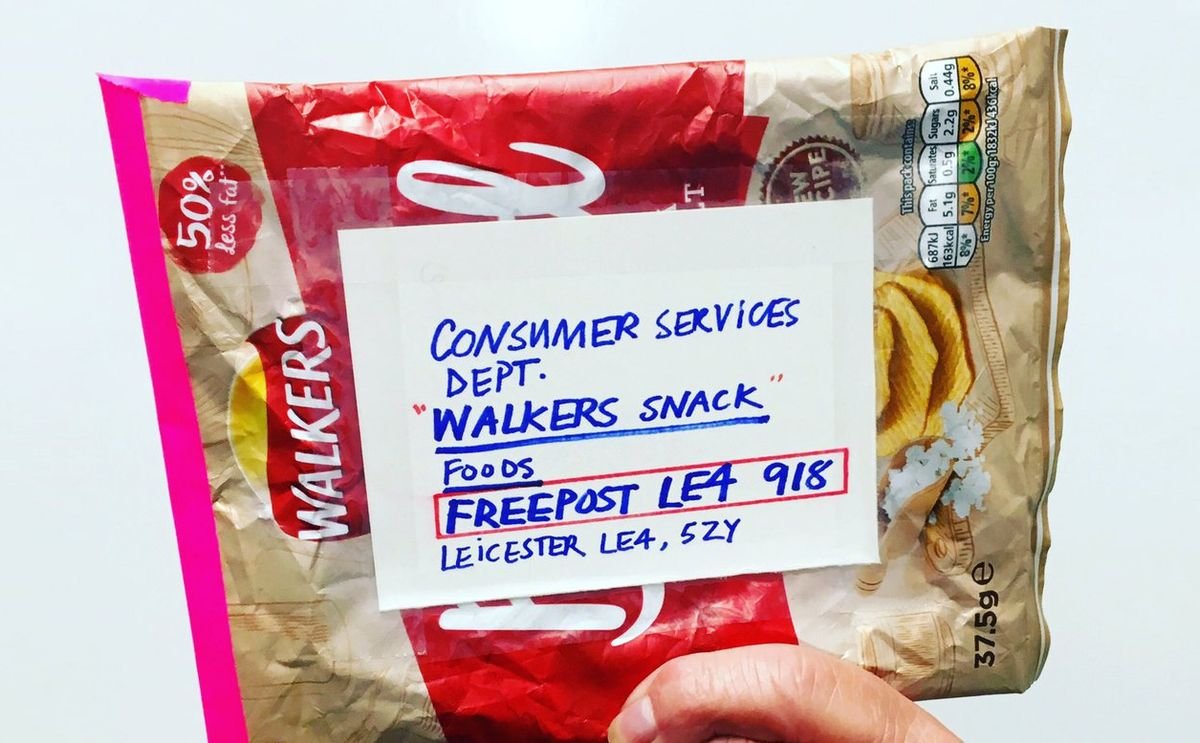 Empty chip bags (crisp packets) are being mailed back to Walkers in protest against the fact that the metallized plastic packaging is not biodegradable and can not be recycled either.
Royal Mail urges campaigners not to mail any chip packages without an envelope!

British potato chip maker Walkers is being inundated with mail deliveries of its own packaging.

An online petition on 38-degrees called on Walkers and other manufacturers to change the materials for their packets to one which is recyclable or a non-plastic environmentally friendly material. The petition received more than 329,000 signatures to date.

In a follow up action 38-degrees urged signers to mail their empty chip bags to Walkers as an act of protest against the bags' non-recyclable design.

As petition organizer Geraint Ashcroft explained, the majority of chip packets, made from metallized plastic, are not recyclable or compostable and have been found fully intact up to 33 years after consumption. The UK alone consumes 6 billion bags of chips a year, and Walkers churns out a whopping 11 million bags daily.

“At today's consumption rate in 33 years' time there will be 200 billion crisp packets either sent to landfill or polluting our oceans.”

“Many will be ingested by animals, fish or birds leading to a slow lingering death.”

Mailing the bags to Walkers is a way to hold the company accountable for its packaging and to pressure it to come up with a better design. Because Walkers has what's known as a 'Freepost' address, the Royal Mail postal service is obligated to deliver anything that is addressed correctly -- even if it's an empty chip bag.

The campaign is controversial. Royal Mail isn't happy about it, asking people to put their chip bags in an envelope to help with ease of delivery.

Critics on Twitter question the logic of buying a product in order to protest against its manufacturer and suggest that giving up chips altogether would improve one's health, as well as the environment. Supporters point out that nobody is being told to purchase chips specifically for the purpose of protest.

Walkers issued a statement on Wednesday, saying it will make its packaging plastic-free by 2025.

“We have received some returned packets and recognize the efforts being made to bring the issue of packaging waste to our attention.”

“The returned packets will be used in our research, as we work towards our commitment of improving the recyclability of our packaging.”

“2025 is too long to wait for you to use plastic free packaging. It's just not good enough. You produce 4 billion packs per year. I'm sending these back to you so you can deal with your own waste. #PacketInWalkers.”

It will be interesting to see how this plays out, but it's indicative of an important shift that's happening in the way people view packaging waste. For years food companies have gotten away with blaming people for poor recycling habits, but that's not fair. It's like "hammering a nail to halt a falling skyscraper."

What we're really dealing with is flawed design, and this is something would be addressed most effectively at the point of production.

The more pressure that is placed on manufacturers to change this flawed way of doing things and come up with sustainable, circular packaging designs, the better off we'll all be.

The protest might have been inspired by a group of school girls from the Indian city of Toothukudi in Tamil Nadu. Prompted by city council, students at Subbiah Vidyalayam Girls Higher Secondary School collected all food wrappers that they generated during a two-week period. They mailed a total of 20,244 empty wrappers back to the manufacturers.
Source
Treehugger
Related Companies
Pepsico

PepsiCo is one of the world's leading food and beverage companies with over $65 billion in net revenue in 2012 and a global portfolio of brands, including several savory snack brands.
Read More
Walkers