A conveyor belt takes potatoes into the $1.1 million chemical imaging machine (Insort's Sherlock Separator-2400) to be inspected for foreign objects or defects, such as surface scabs or rot.

PotatoPro recently reported on the installation of an Insort Sherlock Separator-2400 chemical imaging sorter for the removal of foreign material and potatoes with defects from washed unpeeled potatoes at RWL Holdings Inc (PEI Potato Solutions).

Terrence McEachern of the Guardian spoke with Romana Roberts and Chris Hunt on the use of the Sherlock Separator and the motivation behind its purchase. 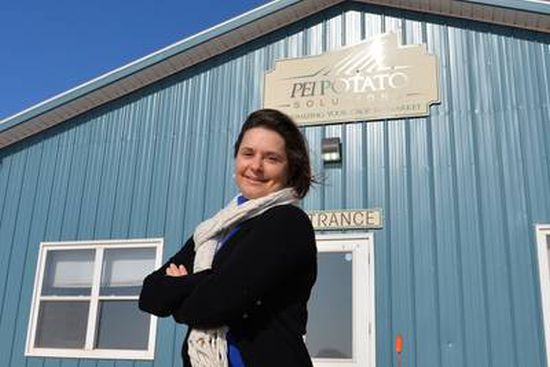 Romana Roberts says the new chemical imaging machine along with two metal detectors ensures the safety and quality of potatoes that pass through the facility.

“We are responding to the needs of the producers and always assist them to maximize their crop value.”

Roberts and her husband Austin own a farm in Kinkora. In 2013, they joined with farmers at Valley Grove Enterprises Ltd. and Hilltop Produce Ltd. to form the potato pre-processing and wash facility.

The company is more commonly known by its trade name P.E.I. Potato Solutions. The company began operations at its 14,000 square-foot facility in January 2014.

P.E.I. Potato Solutions operates as an intermediary between 15 core client farmers and potato processors, such as Cavendish Farms.

Previously, farmers with a crop with some rot would either have to spread the load onto a field for compost and a loss or ask friends to help wash and pick through to see which ones were salvageable, said Roberts. Farmers also could have been turned away by a potato processor and asked to clean up the load and return, all of which costs the farmer money.

“There was a need. We figured there had to be a better way.”

At the other end, the company helps a potato processor by ensuring the load is clean and free of foreign objects, including metal, or surface defects.

The Insort Sherlock Separator-2400 chemical imaging machine was purchased from a company in Austria for $1.1 million. It has been operational at the plant since September.

“There is not a facility like this along the eastern seaboard of Canada. With the additions we’ve done now, this was the first machine of its type in North America.”

“There are other machines that could do something similar, but only after the potato was peeled.” 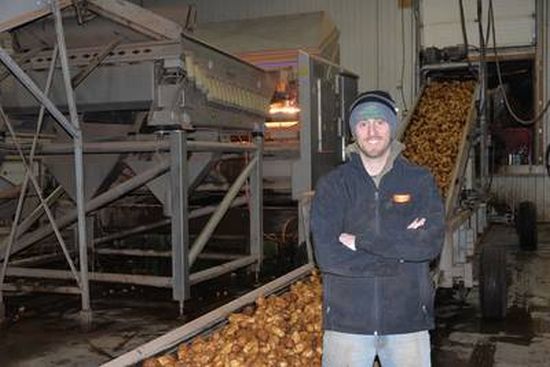 Chris Hunt, P.E.I. Potato Solutions plant manager, stands in front of the $1.1 million chemical imagine machine that detects foreign objects, such as golf balls and rocks, as they pass through.

Between 350 and 400 million pounds of potatoes a year pass through the facility each year, according to Chris Hunt, plant manager.

Once potatoes arrive from the core client farms, they are washed and then make their way to the chemical imaging.

The machine has a camera system that shows digital images of the potatoes as they pass through with defects or foreign objects highlighted in red. It works by recognizing a potato by its chemical composition and properties. Foreign objects with different compositions, such as rocks, golf balls, plastic, wood or glass, are sorted and diverted down a conveyor belt to be further inspected and, if necessary, discarded.

The approved potatoes continue to one of two metal detectors to be further analyzed.

Hunt explained golf balls are a huge issue because they move like a potato when they go down the line. If golf balls aren’t caught and make their way to equipment, such as a French fry cutter, they can cause damage.

In 2014 and 2015 when the public was warned about nails and pins in P.E.I. potatoes, the company purchased the two custom made metal detectors from a company in Germany. Along with the chemical imaging machine, Roberts said food safety is enhanced.

“We can say that we’ve had 100 per cent success preventing foreign material from getting to the end users.”

To help with the purchase of the chemical imaging machine, the Atlantic Canada Opportunities Agency provided the company with a $375,000 repayable contribution in January. The province (Prince Edward Island) also contributed $30,000.

Within the next two years, Roberts said the company is planning to double its capacity with a second building and processing line, which would also require additional metal detectors and another chemical imaging machine as well as new separating and sorting technology.

We are a successful family-run company in the second generation developing, manufacturing and installing high-quality, high-performance and functionally reliable machines and plants.

Insort GmbH (Ltd.) develops and designs electronic optical sorting equipment based on Chemical Imaging Technology (CIT) for the potato industry and beyond.

RWL Holdings is a company that offers services to local (potato) producers including: cleaning, drying, grading and load optimization.
Products