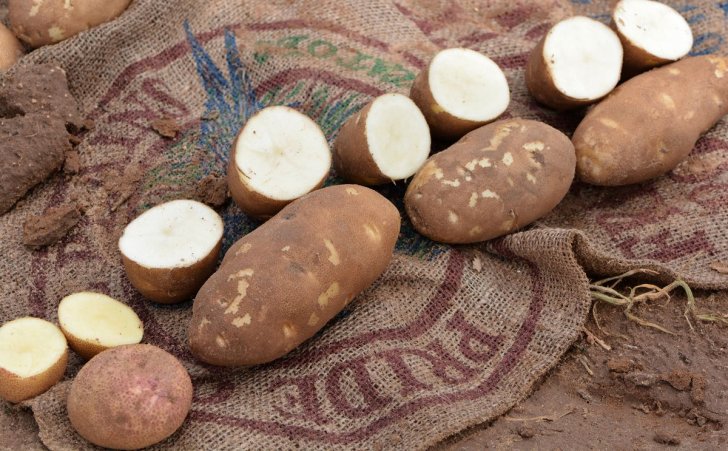 When Kelly Kuball walked the Texas A&M Potato Breeding and Variety Development Program variety display trials near Springlake recently, he was a long way from his specialty potato company in Arvin, California.

Kuball said the Texas A&M potato breeding materials have the potential to provide new products for his Tasteful Selections clientele. As the company’s variety development coordinator, he is looking for potatoes with unique characteristics, such as shape, color, size – “anything that might improve what we already grow and put in our bag for our customers.”

Tasteful Selections concentrates mainly on baby potatoes, a rapidly growing market, he said. This is his fourth year to come observe the trials in Springlake, but he has been growing and evaluating Texas A&M potatoes for seven years in California and at other Tasteful Selections growing regions on the West Coast.

They currently have three Texas experimental varieties in their advanced trials.

“If the varieties pass all the qualifications in early observation trials, we will get then graduate the lines into replicated and commercial tests.”

Kuball was among about 50 people who attended the annual Potato Field Day in cooperation with Springlake Potato Sales Inc. and the Bruce Barrett Farm.

“We work in different market classes.”

“Clearly the fresh market russets are very important, followed by the chippers.”

The Texas A&M program is known for its release of several strains of the fresh-market Russet Norkotah strains, including No. 278, which she said is “a beautiful fresh market russet, long appreciated in the marketplace.”

The Texas A&M Russet Norkotah strains currently have 35 licensees in 12 states. Another recent release, Reveille Russet, has been licensed to 16 seed growers, with comments that it is “a very good baking potato.”

“Vanguard Russet is our latest release.”

“It is a blocky, attractive potato that we have great hopes for. We also have another russet variety with pink eyes and yellow flesh, but we are still in the process of finding someone interested in promoting it.”

In terms of specialty potatoes, she said they are working with varieties that provide different sizes, colors of skin and flesh, as well as some with higher levels of antioxidants.

“We are working in the area of smaller potatoes, bite-sized potatoes, but that’s a relatively new market, and we need promoters or ambassadors who are interested in moving those potatoes to the public.”

“We also have some pretty advanced materials, not quite ready to be released, but very interesting from the perspective of different culinary preparations.”

“There is one particular variety with a red flesh that I think could be useful for vegetarians. It almost looks like red meat.”

“It’s kind of funny, we were calling it ‘paparoni’ after papas, which means potatoes. We cut them like pepperoni to put on a pizza.”

“We need people who are creative and think outside of the box to start giving value to parameters like nutritional content, taste and originality.”

How the Potato Breeding program works

The potato breeding program starts by making crosses between parental lines that may have a desired trait, but not the total package, Vales said. The crossing block has around 70 parents.

“We generate fruits or berries containing true potato seed from that; we plant the seed to generate seedling tubers that go to the field for the first year.”

“They are planted at our Springlake and Dalhart locations. This year there are 70,000 different genotypes.”

When harvested, Vales said all the tubers are looked at according to size, shape, color and other qualities. Selection is stringent at that level, with only 1-2 percent selected to be replanted in the second field year. Every year the seed is increased and additional selections are made.

“Once we have enough seed from one variety, we will move them to replicated trials, where we pay attention to yield, quality, disease resistance, chipping quality and other parameters.”

The chipping potatoes have a separate national effort with several other states and trials, Vales said.

While Texas A&M has a big breeding effort in chipping, she said they are not ready to release anything yet.
Source
AgriLife Today
Like to receive news like this by email? Join and Subscribe!
Related Companies