A depiction of the process for the elimination of amylose starch in a potato. Courtesy: Texas A&M AgriLife graphic

For example, waxy potatoes, which are high in amylopectin content, have applications in the production of bioplastics, food additives, adhesives and alcohol. Two articles recently published in the International Journal of Molecular Sciences and Plant Cell, Tissue and Organ Culture journals outline how CRISPR technology can advance the uses of the world’s largest vegetable crop.

Both papers include the work done by Stephany Toinga, Ph.D., who was a graduate student in the lab of Keerti Rathore, Ph.D., AgriLife Research plant biotechnologist in the Texas A&M Institute for Plant Genomics and Biotechnology and Department of Soil and Crop Sciences.

"The information and knowledge we gained from these two studies will help us introduce other desirable traits in this very important crop."

Potatoes are the No. 1 vegetable crop worldwide and the third most important human food crop, only behind rice and wheat in global production. Potatoes are grown in over 160 countries on 40.8 million acres and serve as a staple food for more than a billion people.

Potatoes are a cool-season crop that is relatively sensitive to heat and drought stress. The crop also suffers from pests such as Colorado beetle, aphids and nematodes, as well as diseases including early and late blight, zebra chip, Fusarium dry rot and a number of viral diseases. Late blight was the cause of the Irish potato famine.

Starch is key for both dietary and industrial uses

The amount of starch in potato tubers is the main factor that determines a potato’s use. High-starch potatoes are often used to make processed foods such as french fries, chips and dehydrated potatoes, Vales said.

Potatoes with low to medium starch levels are frequently used for the fresh or table stock market, she said. For the fresh market, additional important considerations are tuber appearance, including skin texture, skin color, flesh color and tuber shape.

Recently, specialty potato types with different shapes, such as fingerlings; smaller sizes; and red, purple or yellow skin and flesh colors are becoming popular because of their convenience in cooking and increased nutritional value.

In addition, potato starch can produce ethanol for fuel or in beverages like vodka; a biodegradable substitute for plastics; or adhesives, binders, texture agents and fillers for the pharmaceutical, textile, wood and paper industries, and other sectors.

For example, such starches are the preferred form for use as a stabilizer and thickener in food products and as an emulsifier in salad dressings. Because of its freeze-thaw stability, amylopectin starch is used in frozen foods. Additionally, potatoes rich in amylopectin starch yield higher ethanol levels compared to those with other starches.

The benefits of breeding potatoes with select starches

Developing potato cultivars with modified starch could open new opportunities, Toinga said. Potatoes with high amylopectin and low amylose, like the gene-edited Yukon Gold strain she described in the International Journal of Molecular Sciences, have industrial applications beyond traditional uses.

In contrast, potatoes with high amylose levels and low amylopectin would be desirable for human consumption, Vales said. The amylose acts like fiber and does not liberate glucose as easily as amylopectin, thus resulting in a lower glycemic index and making potatoes more acceptable for people with diabetes.

CRISPR/Cas9 technology has expanded the toolset available to breeders, Vales said, and it represents a more direct, faster means to incorporate desired traits into popular commercial crop varieties. Conventional breeding is a lengthy process that can take 10-15 years.

"We utilized the Agrobacterium method to deliver the CRISPR reagents into potatoes because it is reliable, efficient and least expensive compared to all other delivery methods."

"In the first study, highlighted in the Plant Cell, Tissue and Organ Culture article, a potato line containing four copies of gfp, a jellyfish gene that allows a fluorescence-based visualization of the gene’s activity, was targeted for mutation using the CRISPR/Cas9 system."

In essence, this project provided an easy-to-see trait that enabled researchers to optimize the methodology. 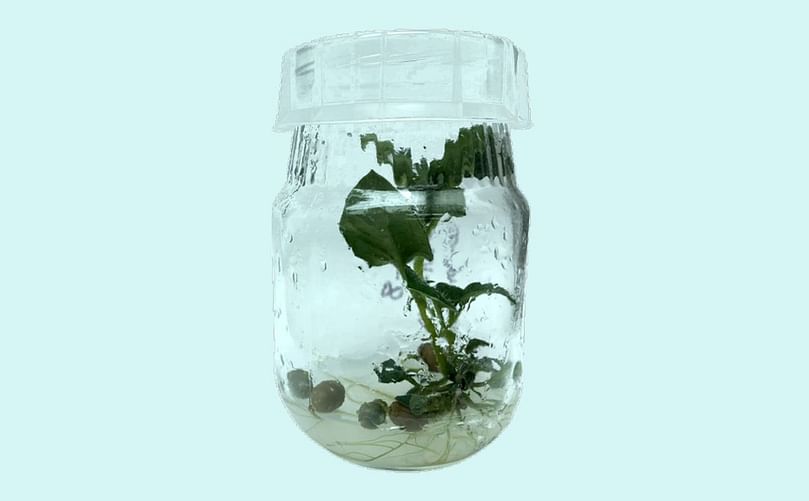 "Loss of the characteristic green fluorescence and sequencing of the gfp gene following CRISPR treatment indicated that it is possible to disrupt all four copies of the gfp gene, thus confirming that it should be possible to mutate all four alleles of a native gene in the tetraploid potato."

Among the various potato cultivars evaluated in the first study, the Yukon Gold strain regenerated the best, and so it was used for the second study.

In the second knockout study, described in the International Journal of Molecular Sciences, the native gene gbss in the tetraploid Yukon Gold strain was targeted to effectively eliminate amylose. The result was a potato with starch rich in amylopectin and low in amylose.

"One of the knockout events, T2-7, showed normal growth and yield characteristics but was completely devoid of amylose."

That tuber starch, T2-7, could find industrial applications in the paper and textile sectors as adhesives/binders, bioplastics and ethanol industries. Tuber starch from this experimental strain, because of its freeze-thaw stability without the need for chemical modifications, should also be useful in producing frozen foods.

Potatoes with amylopectin as the exclusive form of starch should also yield more ethanol for industrial use or to create alcoholic beverages. As the next step for these studies, the T2-7 strain has been self-pollinated and crossed with the Yukon Gold strain donor and other potato clones to eliminate the transgenic elements.
Source
Texas A&M AgriLife Research
Like to receive news like this by email? Join and Subscribe!
Related Companies