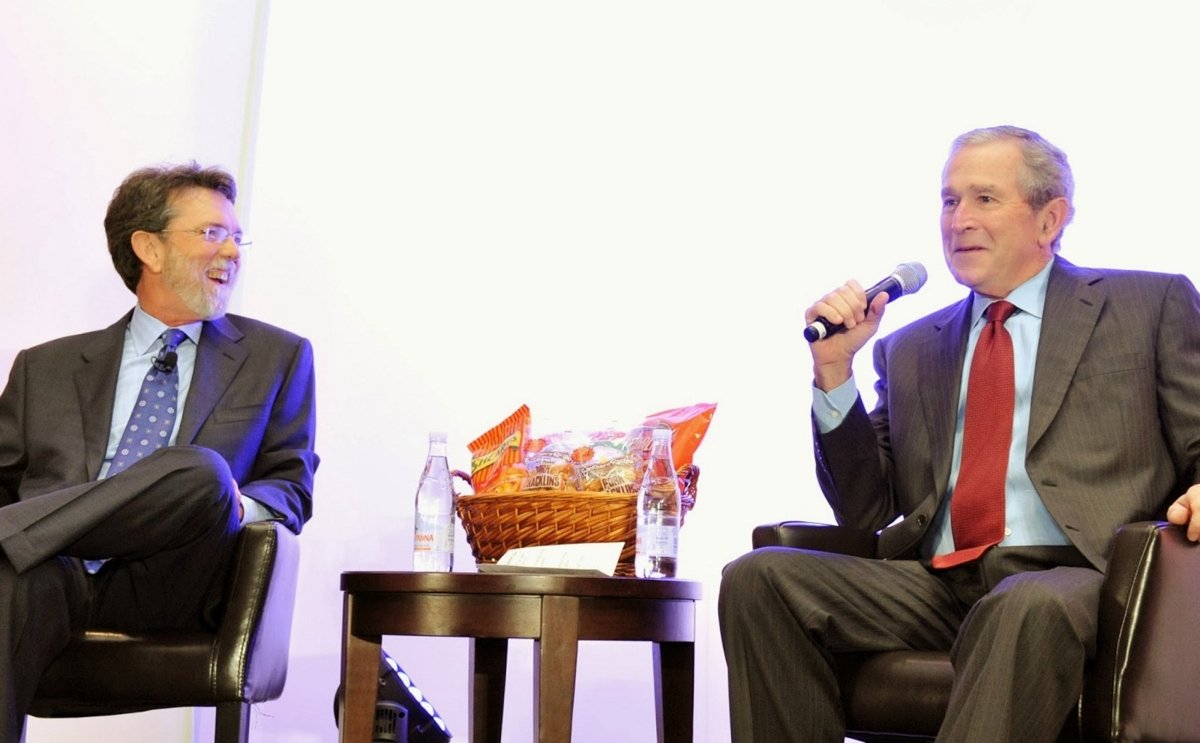 President George W. Bush, in a fascinating conversation before a SNAXPO audience yesterday, shared many of his experiences as President, and the years following, in a discussion that for many in the audience was a “once in a lifetime experience.”

Mark Singleton, Rudolph Foods Company, SFA’s incoming chairman, moderated the program, asking questions that prompted President Bush’s candid remarks that included discussions of his experiences during the 9-11 crisis and the events that followed. He was invited to the stage by Craig Hatfield, Bryce Corporation, who sponsored the event with Heat and Control/Ishida Co., Ltd. and Rudolph Foods.

“I want to thank you for letting me come and visit with you,” President Bush said. “My area of expertise is what its like to be President. And, how great it is to be from Texas.”

His remarks, in answer to Singleton’s questions, discussed activities at the George W. Bush Presidential Library on the campus of Southern Methodist University and he related his experiences in context with the Library, which promotes what the President said “are the values that made us great that need to be defended.”

One after another, attendees left the ballroom where the breakfast meeting took place realizing that they had just been treated to insight that few Americans are privileged to experience.

“I thank President Bush on behalf of SFA,” said outgoing Chairman Chip Mann, Pretzels, Inc. “What a wonderful way to start the last day of SNAXPO before we head to the floor.”

Saying that SNAXPO brings together in one location the three primary purpose of SFA, government affairs, education and networking, SFA President & CEO Tom Dempsey was pleased with the results of SNAXPO 2014 in Dallas, which closed out last night. 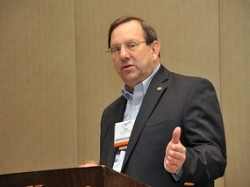 While the appearance by former President Bush was the “absolute highlight” of SNAXPO, Dempsey also emphasized the importance of the opening day presentation Sunday, by Frito-Lay’s Anindita (Ann) Mukherjee, the state of the industry report Monday by IRI's Sally Lyons Wyatt, and the six educational sessions held in trade show floor pavilions.

Two of those educational sessions focused on government affairs, noted Dempsey, as did the SnackPAC reception Sunday evening. “We were brought up to date on the key legislative and regulatory issues facing the industry, and the trade show floor was an outstanding place for networking, and it’s been happening there the last three days – in addition to other social events that have been held in conjunction with SNAXPO,” he said.

“Ann Mukherjee’s insightful and uplifting presentation on the industry and opportunities for growth for all of us was one of the finest opening sessions in a long time,” Dempsey declared. “In spite of the weather, I think we’ve had a fairly successful show. The proof will be in next year’s attendance, how the exhibitors and non-members who attended react, and whether they come back next year.”

Heard on the Show Floor 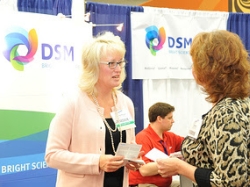 Dan Staker, Plastic Packaging Technologies – “SNAXPO is a great place to reconnect with folks and get caught up on current activities, investments and technology, and to spend time together in hopes that you can walk away with new ideas, new concepts and at the same time reaffirm that you as a company are headed in the right direction.”


Jeff Higgins, Savor Seasonings – “It was good to see more people at the SnackPAC reception the other night. We need their support. Mike Torrey (SFA’s government affairs consultant) did an outstanding job of bring us up to speed on all the legislative issues. I encourage every member to support SnackPAC.”

Vance Allred, Cereal Ingredients, Inc. – "This was our first time exhibiting here, but for the last 18 months we’ve experienced a lot of interest from this industry so we decided to come. We’re glad we did. It’s been great how friendly everybody has been – people coming over introducing themselves. They have made us feel really welcome. We have really enjoyed the show so far.”

Jeff Delenikos, LAKOS Separators and Filtration Solutions – “We’ve had a lot of conversations with vendors who we’ve been doing business with. We’ve had lots of networking opportunities and developed good leads from that. Overall, it’s been good. It is good to show yourself here.”

Paul Bluman, LifeSpice Ingredients – “The best part of SNAXPO is the face to face interaction and the chance to meet with customers outside of the workplace, and a chance to learn more about them on a personal level. That’s what LifeSpice is all about and SNAXPO gives us an opportunity to do that.”

Stuart Carrico, Wenger – “We’re seeing a lot of our existing customers and meeting a few new ones. It’s good to connect with all of the folks within the industry, the other manufacturers and ingredient suppliers.”

Jeff Martin, Utz Quality Foods, Inc. – “It’s been great. SNAXPO gives you an opportunity to try new things. Suppliers keep bringing out different flavors every day for you to try. It gives you a chance to build solid relationships between manufacturers and suppliers. I have seen a lot of great collaboration going on here. There is a strong international presence, so you get to see international partners who you wouldn’t normally see. The education has been very informative, especially the regulatory and legislative sessions. That is great stuff.”

The next SNAXPO, SNAXPO 2015 will be held March 28-31 at the Gaylord Palms Resort & Convention Center, Orlando, Florida. Mark your calenders now!

Heat and Control are process and product technologists committed to advancing food, pharmaceutical, and other industries with science and imagination.
Read More
Frito-Lay North America (FLNA)

Kraft Foods Group, Inc., launched October 2012 as a spin off of Mondelēz International, merged in July 20165 with Heinz to from Kraft-Heinz
Read More
Pretzels Inc

Bryce Corporation is a US based manufacturer of packaging films. One of their specialisations is packaging material for savoury snacks.
Read More
DSM Food Specialties