Participants at the 25th annual Texas Potato Breeding and Variety Development Program field day learned that the harvest is underway, that psyllids are threatening unharvested fields and that new varieties are showing lots of promise.
(Courtesy: Texas A&M AgriLife)

Participants at the 25th annual Texas Potato Breeding and Variety Development Program field day learned that the harvest is underway, that psyllids are threatening unharvested fields and that new varieties are showing lots of promise.

These were some of the “headlines” shared with about 60 producers and researchers gathered recently for the 25th annual Texas Potato Breeding and Variety Development Program field day near Springlake in the Bruce Barrett potato fields.

The potato breeding program is conducted by Texas A&M AgriLife Research and the Texas A&M University department of horticultural sciences under the direction of potato breeder Dr. Creighton Miller in College Station.

Miller has developed the program over the past 40 years to breed high-quality, high-producing potatoes for the fresh, chipping and storage markets. He conducts breeding trials near Springlake with Barrett Farms and near Dalhart with CSS Farms.

The Springlake trial includes 33,161 seedlings, while the Dalhart trial has 41,659 seedlings, totaling 74,820 seedlings from 463 different crosses, he said. Among those are the Texas Russet Norkotah strains and the newer Reveille Russet released last year.

“Our Norkotah strains tend to be very popular throughout the country,” Miller said, adding there are about 40 licensees throughout the U.S. and, collectively, these strains rank fifth in varieties approved for certification.

“We are extremely proud of our Reveille Russet, which is growing in popularity.”

“It is a new russet we think will ultimately replace Norkotah because it stores better, has a higher percentage of marketable tubers and doesn’t bruise as easily.” 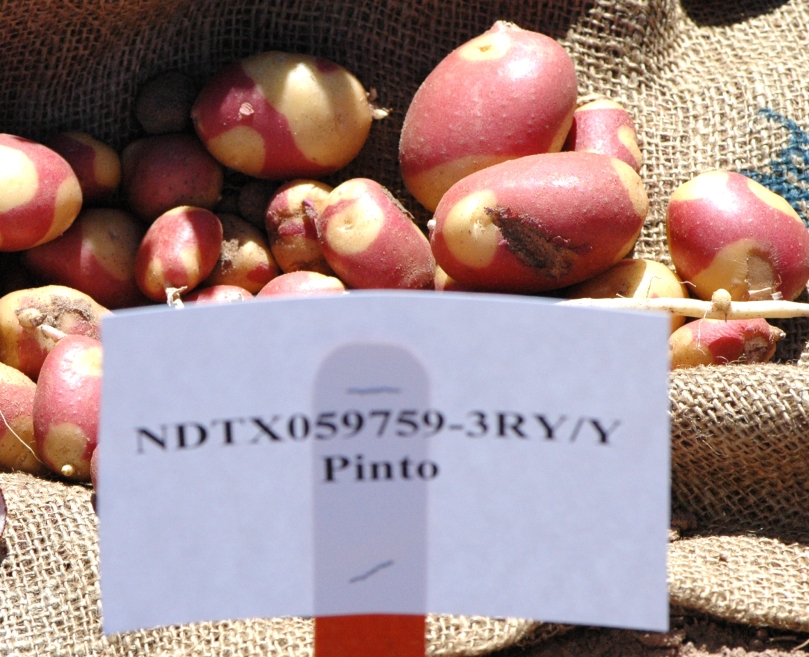 And, Miller said, the program is ready to release another variety this year, this time a pinto:

“We are calling it Harlequin Gold.”

“It is red and yellow skinned with a yellow flesh. We think there’s a chance for it to become very popular in the specialty market.”

Miller said the crosses he makes in Texas result in about 20,000 seedlings and his team works cooperatively with other breeding programs across the country to grow about 100,000 seedlings each year.

The varieties that perform well are entered into trials across the U.S. to see how they produce in other locations, he said.

Another highlight for the breeding program is collaboration with a company called Tasteful Selections, which is looking for smaller potatoes, Miller said.

These varieties need to have a heavy set, or an above-average number of tubers produced on each stem. The potatoes will sometimes be the size of a marble and they can be used in stews and soups.

“There are some opportunities there we see.”

But across the trial fields at the recent field day, the talk was about hot weather and high psyllid numbers affecting potato growth and harvests throughout the Texas High Plains, from Olton to Dalhart.

Barrett said this year the potatoes matured quickly and harvest started early, which is a good thing. Harvest started June 21 and he hopes to be done by Aug. 15. So far, the quality of the red potatoes has been good, as well as the yellows, and the russet potato harvest is just about to start.

However, he said the hot weather and an influx of psyllids could be hurting the potatoes still growing in the fields. The psyllid insect can inject bacteria into the potato, stopping its growth.

“The psyllids and heat are hurting us the most.”

“We’ve had psyllids all year, but starting the end of June, early July, the numbers started spiking on the sticky traps. They went from seven or eight per trap up to hundreds per trap.”

He said about 85 percent of his crop aimed at the fresh market was complete, so the psyllids would not affect a big percentage. Barrett:

“We are more of a preventative sprayer rather than a fix-it sprayer – we have a program or protocol we follow.”

“A lot of our spray bullets we’ve already used, and it’s really hard to control them once you get to this point.

“That’s what part of this field day is about: Can we get genetics that help?”

“We have determined psyllids don’t like some varieties. Timing of sprays is another thing to consider. We need to look at a lot of different modes of action, and these variety trials help us.”

Grant Monie, general manager for CSS Farms at Dalhart, said they, too, were seeing a higher influx of psyllids in both Olton and Dalhart where they are growing potatoes for the chipping and storage markets:

“I’m not sure whether they are overwintering nearby or are an influx from the southern areas of Texas, but we are definitely seeing a lot more pressure this year and have seen some spikes in population coming in.”

“We are in a battle to stay on top of them.”

“We’ve detected zebra chip symptoms in the crop, but most have been the psyllid yellows that are constricting the growth of the plant and its vigor.”

Monie said they are seeing some difference in cultivars and colors as the psyllids do damage, and that can affect their production.

“If you have 30 days to finish out the crop or have a late-bulking variety, it really inhibits bulking ability to get that last third or two-thirds at the end.”

“The other side of it is we don’t know what the quality concerns will be down the road. We have a good IPM program that we go through and just stay with it throughout the season.” 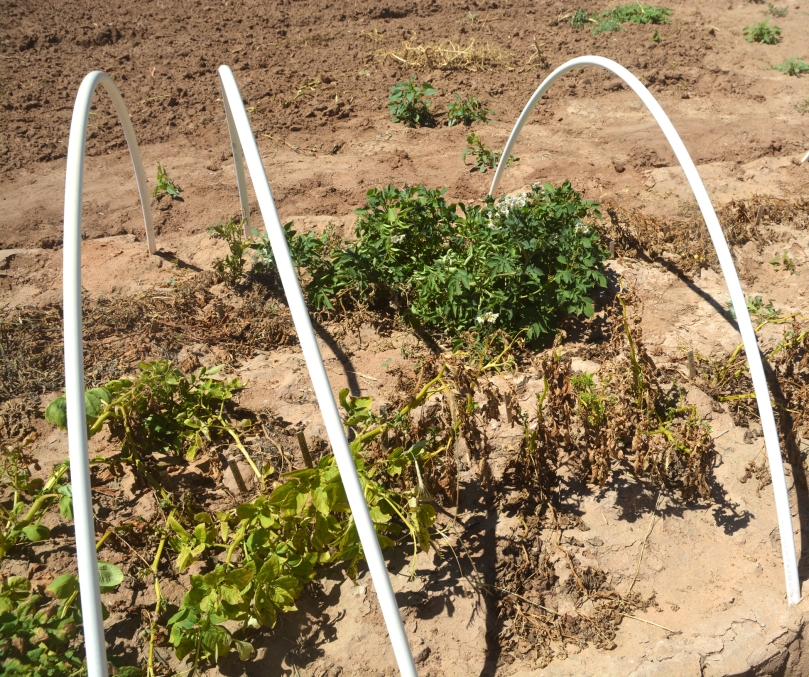 “If we can identify varieties with insect resistance and then cross those with varieties that are tolerant to the bacteria that causes zebra chip, we could get stronger resistance to the disease,”

“We have also been able to identify some varieties that are very susceptible to insects and diseases.”