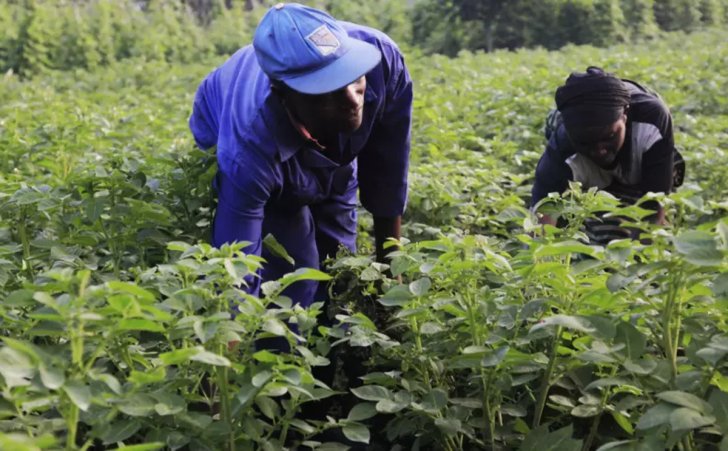 Potato farmers in Rwanda who are counting losses due to late blight disease welcome the plan to use agricultural biotechnology in developing a resistant crop variety. (Courtesy: Sam Ngendahimana).

Potato farmers have welcomed the government’s ongoing trials on the use of agricultural biotechnology in producing a new Irish potato variety resistant to the devastating late blight disease.

If successful, farmers can grow the new potato variety without necessarily using agrochemicals.

According to the International potato Centre (CIP), in East Africa, the disease can destroy as much as 60-100 per cent of the crop.

The CIP scientists working with Rwanda are using bioengineering to transfer resistance genes from wild potato relatives into varieties that are already popular with farmers and consumers to fight the disease.

Athanase Nduwumuremyi, a senior scientist at the Rwanda Agriculture and Animal Development Board (RAB) told journalists, on July 12, that the potato variety that is resistant to late blight disease is being developed using agricultural biotechnology.

Agricultural biotechnology is a range of tools, including genetic engineering that alters living organisms to improve plants or animals.

"The new potato variety is resistant to late blight and will cut off the use of agrochemicals."

He estimates that, according to the research roadmap, by 2025, the new variety will be ready for distribution to farmers.

"It will not take too long to reach farmers if the process is fast-tracked."

Farmers who are counting losses due to late blight disease welcome the plan to use agricultural biotechnology in developing a resistant crop variety.

"The disease erodes 80 per cent of expected produce if a farmer has no financial capacity to afford required agro-chemicals. It affects the crop during rainy seasons which are also seasons for growing potatoes."

Karegeya grows Irish Potatoes on about 15 hectares every season. He said that once the disease-resistant variety is ready, it could cut the huge costs incurred on agrochemicals and paying workers who do the job.

"We have to use agrochemicals eight times in two months."

Karegeya spends RWF 3.6 million (about USD 3485) on agrochemicals to fight the disease every season.

"One hectare requires three kilos of agrochemicals. Each kilo costs RWF 5,000 (about USD 4.85), and we spray twice a week."

"We hope the agricultural biotechnology that the government is talking about could save us from losses and costs incurred on agrochemicals because smallholder farmers just can’t’ manage with such losses."

According to Jean Marie Vianney Nteziyaremye, a member of an Irish potato farmers’ cooperative in Kabatwa sector, in Nyabihu District, a farmer spends RWF 120,000 (about USD 116) on agrochemicals per season to spray crops on 2,000 square metres of farm land.

"During the rainy season we spray Dithane agrochemical. It requires spraying two times a week which is done in the first two months and a half before the crops reach four months of maturity."

This, he said, requires spraying more than 16 times, which is exorbitant. According to Florence Uwamahoro, the researcher who did a survey in 10 districts, late blight was reported by up to 73 per cent of surveyed farmers.

The African Agricultural Technology Foundation (AATF) and RAB recently launched the Rwanda chapter of the open Forum on Agricultural Biotechnology (OFAB). It aims to enhance awareness and knowledge sharing on innovative agricultural technologies in increasing production, Error! Hyperlink reference not valid. in the country.

The platform is in seven other countries – Burkina Faso, Ethiopia, Ghana, Kenya, Nigeria, Uganda and Tanzania. The food import bill for Africa rose to USD 49 billion in 2019 from USD 35 billion, in 2015. Scientists say that there is a need for home-grown scientists’ innovations in agricultural biotechnology to help reduce the food import bill.
Source
The New Times
Like to receive news like this by email? Join and Subscribe!

The Rwanda Agriculture and Animal Resources Development Board (RAB) is an autonomous body. RAB has the general mission of championing the agriculture sector development into a knowledge based; technology driven and market oriented industry.

Rwanda Agriculture Board (RAB)
Where