Shoppers in the United Kingdom bought 1.4 per cent more fresh potatoes this year compared to last year and 3 per cent more than in 2015, new data shows.

Kantar Worldpanel report that a total of 2.2 million tonnes potatoes were sold in the last 12 months.

This is a result of:

During the same period, AHDB has executed the Potatoes: More than a bit on the side marketing campaign. The three-year promotion was funded by the EU and run jointly with Bord Bia in Ireland

“These retail figures will be welcome news to farmers who have long been worried about falling sales.”

“We hope they show that the work we have put into spreading all the good nutritional news about potatoes – like the fact that they are fat free, gluten free and low in sugar – is beginning to take hold.”

“We have also invested in social media influencers, so that shoppers can see their peers cooking with potatoes in ways that fit their lifestyle. Health is important, but enjoyment is the main reason that we buy food.”

“Potatoes are tasty, convenient and affordable so it’s no surprise we’ve had a good reaction to the campaign.”

Independent analysis of AHDB’s campaign, which has generated over five million web views at lovepotatoes.co.uk and nearly a 100 million reach on social media, shows that those who have seen it are more likely to see potatoes as a healthy, essential part of the diet, than previously.

“Through the tracking work that we carry out we have seen a shift in the way people view potatoes, with 82 per cent of consumers agreeing that ‘potatoes are healthy’, from a base of 68 per cent, three-quarters agreeing that they are an essential part of any diet, up from 60 per cent, and 72 per cent acknowledging the fact that potatoes are fat-free, up from 55 per cent.” 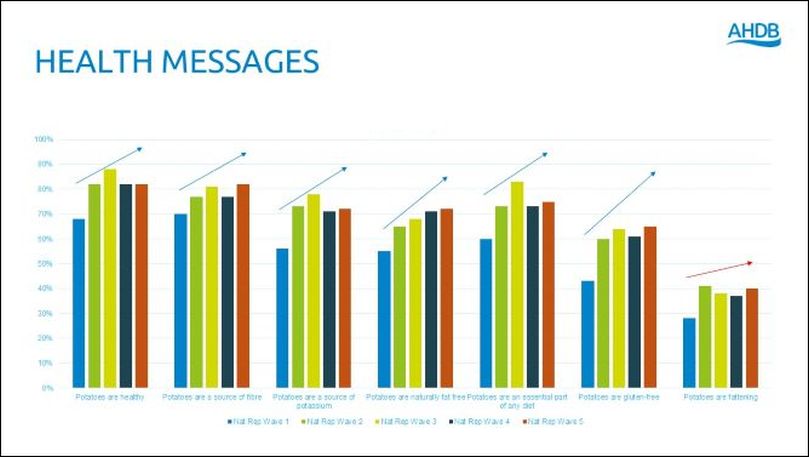 82 per cent of consumers agree that ‘potatoes are healthy’, from a base of 68 per cent, three-quarters agreeing that they are an essential part of any diet, up from 60 per cent, and 72 per cent acknowledging the fact that potatoes are fat-free, up from 55 per cent.

“Versatility is still a key benefit for potatoes, with 92 per cent agreeing that they are a versatile product.”

Meanwhile, two major universities have completed research into the nutritional benefits of the potato in recent months and have underlined their value to our health.

A recent University of Surrey study reported that: ‘Potatoes are an important source of micronutrients, such as vitamin C, vitamin B6, potassium, folate, and iron and contribute a significant amount of fibre to the diet.’

This vitamin content and that the fact they keep you fuller for longer, means the may be more effective for weight control than other carbohydrates said the researchers.